MANILA, Philippines - Korean TV talent search show “Star King” has issued an apology after a recent episode came under fire from viewers who criticized the show for depicting a wrong portrayal of Saudi Arabians and Muslims in general. 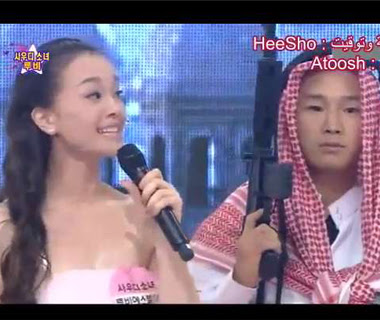 Viewers became incensed when they saw the Aug. 13 episode of the show, which they claim denigrates Islam by making fun of Muslims and portraying them as terrorists.
The show featured 18-year-old singer Ruby Estelle, a Korean-American from Washington who currently lives in Saudi Arabia with his parents.
The episode tried to introduce to viewers information about the culture and religious traditions in Saudi Arabia but it backfired.
In one segment, MC Kang Ho Dong tried to get close to Ruby but the girl used a stick to ward him off. Then Korean singer Shorry J of Mighty Mouth, who was wearing a traditional Saudi garb and headdress, brandished a rifle to scare Kang away.
“It’s against the law for men and women to get close in Saudi Arabia,” explained Ruby on the show.
In another segment, Leeteuk, leader of boy band Super Junior, unveiled a photo of a supposed female weather reporter featuring a woman wearing traditional Muslim dress and holding an umbrella. This drew laughs from the Korean stars who were present.
Viewers complained that this made fun of Muslim’s traditional clothing.
After the episode was aired, viewers posted angry messages on the show’s website. Ruby also received negative messages on Twitter.
“Hate messages for something I wasn't even responsible for... oh well. Really hard day for me today...i hope everything becomes better for everyone.  Things will get better when people know the truth! Let's have faith! :),” Ruby posted on Twitter.
Pages on Facebook were also created demanding that TV station SBS and “Star King” apologize immediately.
Videos condemning the “Star King” episode were also uploaded on YouTube.
Star King apologized, saying that it had no intention of demeaning the culture and traditions of Saudi Arabia. It also promised that the show will be very careful so as not to repeat the same mistake.
http://www.mb.com.ph/articles/331001/korean-tv-talent-search-show-scored-muslim-portrayal-apologizes
at 3:59 PM