The tvN drama “Crash Landing on You” has achieved success with the finale garnering the highest rating on the cable channel’s history, and has renewed the romance rumors between its stars.

“Crash Landing on You,” starring Hyun Bin and Son Ye-jin, aired its 16th and final episode on Feb. 16. 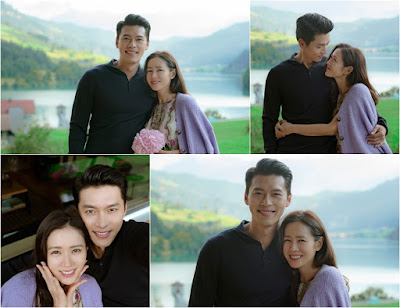 According to Nielsen Korea, the finale garnered 21.68 percent with 6.33 million viewers to achieve the highest rating among tvN dramas.

Among non-terrestial TV dramas in Korea, last year’s hit “SKY Castle” is still No. 1 with 23.77 percent for its final episode with “Crash Landing on You” placing second.

After the airing of “Crash Landing on You,” tvN released photos of Hyun Bin and Son Ye-jin that renewed rumors of their romance.

Dating rumors have hounded the two since photos of them together in a supermarket in the US in January 2019 circulated online.

“So when is the wedding announcement?!” one commented while another said, “This is for real. There’s no way you can look at someone like that unless you have feelings for them,” according to Netizen Buzz.

One wrote, “What’s up between them? There’s something… real… that doesn’t feel limited to the drama. There’s no way you can look at each other like that unless it’s real. So lovely.”

Another said, “If Hyun Bin is giving her eyes like that purely for the job and not because he has feelings for her, then he’s a bad guy. How can this be just acting????? Come on… Please just admit you’re dating.”

Link to my original article on Manila Bulletin online:
https://entertainment.mb.com.ph/2020/02/18/crash-landing-on-you-achieves-success-renews-romance-rumors/

To contact the author, send email to sangchusan(at)gmail.com
at 12:06 PM