By JONATHAN M. HICAP
Manila Bulletin
MANILA, Philippines - K-pop music has been enjoying huge popularity in the Philippines in the past few years. Since 2009, popular idol groups have visited the country including SHINee, Super Junior, 4Minute and BEAST. 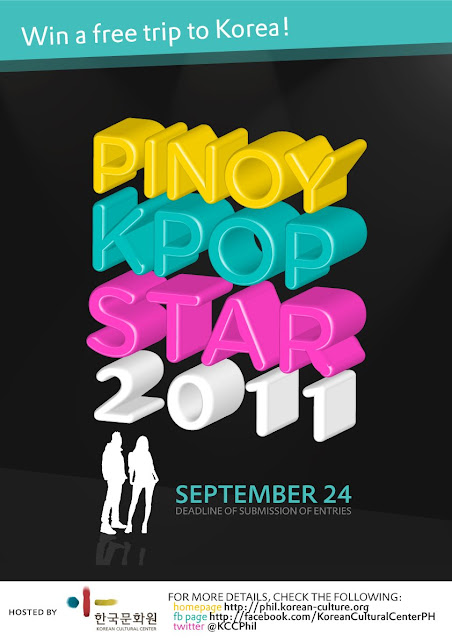 With this, the Korean Cultural Center in the Philippines (KCC), under the Korean Embassy in the Philippines, has launched the “Pinoy K-pop Star 2011” contest to search for the ultimate K-pop singer in the country.
The KCC said the winner will represent KCC Philippines in a Hallyu concert in South Korea on Nov. 26 that will feature the winners from all Korean Cultural Centers in the world.
“Pinoy K-pop Star 2011” is a singing competition. Applicants may do a solo performance, singing with dancing including having back-up dancers, singing with musical instruments, singing in groups or acapella.
An applicant should perform a Korean song and without the voice accompaniment of the original artist. Instrumental, music removed and minus one are allowed to be used.
A contestant should record a video of the performance and upload it on YouTube. The video link should be sent to kccphevents@gmail.com along with the entry form and a photo of the contestant.
Deadline for the submission of entries is on Sept 24. KCC Philippines will announce the finalists on Sept. 26.
The grand prize winner will get a free trip to South Korea to be part of the Hallyu concert, trophy and gift packs from KCC. The second prize winner will get a trophy and gift packs from KCC.
A popularity award will also be given out to a finalist whose entry will have the most “likes” on KCC’s Facebook page.
Criteria for judging are: singing techniques – 50 percent, K-pop Star Style – 30 percent, and pronunciation – 20 percent.
The Korean Cultural Center in the Philippines has been spearheading the promotion of Korean culture in the country including K-pop and traditional music and dance, Korean language, films and food.
Article link: http://www.mb.com.ph/articles/334314/korean-cultural-center-searches-ultimate-pinoy-kpop-star