I had the chance to interview Korean pop star Jay Park last Oct. 30, 2011 for Manila Bulletin when he visited Manila for the MTV EXIT Live concert. The interview was held at the Crowne Plaza Galleria Manila hotel in Pasig City. Also had the chance to meet fellow K-pop writers from the Philippines' major media outlets.


MANILA, Philippines - When popular K-pop star and b-boy Jay Park visited the Philippines for a show last year, he was just starting his solo career and was determined to make it on his own. A year later, he was back in the country armed with a flourishing career, and a fiery passion to do things that he loves the most including his advocacies. 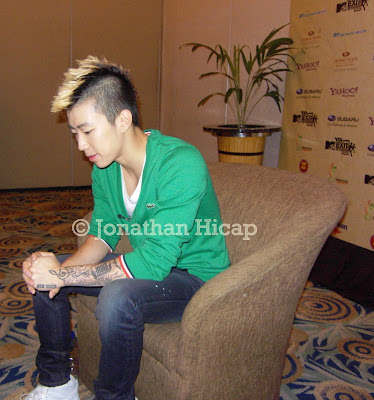 Jay Park told Bulletin Entertainment that he considers “Take A Deeper Look,” his first Korean album that was released last April, to be his greatest achievement as solo artist so far.
“I’ll probably say putting out an album. You know, “Take a Deeper Look.” I wrote all the songs. I never thought I would be able to write songs in Korean maybe like three years ago. My Korean wasn’t very good (then). Couldn’t really write it,” he said during an interview at Crowne Plaza Galleria Manila hotel on Oct. 30.
The album achieved feats as it entered at No. 3 on Billboard’s World Albums chart and No. 26 on Billboard’s Heatseekers Album chart.
It also topped iTunes Soul Albums charts in Canada and Denmark and was in the top five in the US, Australia, Norway, Japan and Italy charts.
Jay Park also made history by winning the K-Chart award on KBS “Music Bank” on his first day of TV promotion on May 6 this year.
On his second visit to the Philippines, Jay Park was on a mission to use his music to create awareness and encourage everyone to join the fight against human trafficking.
He headlined the MTV EXIT Live in Manila concert last Oct. 29 at the SM Mall of Asia concert grounds together with California-based band Evaline and Filipino artists Parokya ni Edgar, Pupil, Itchyworms, and Ebe Dancel. Jason Mraz also made a special appearance.
MTV EXIT said “Jay Park delivered a spectacular performance to over 25,000 screaming fans.” He performed his songs including “Nothing on You,” “Abandoned,” “Tonight” and “Demon.”
Asked how he would rate his performance in the concert, Jay Park humbly said he would give himself a rating of 5 to 6 out of 10.
“I had two shows the night before actually. One in Busan then I had a club show then like I didn’t sleep and got right on the plane. I came here. I was really tired but I tried to keep the energy up. My voice was kinda hoarse so I’ll probably say 5 out of 10 or 6 out of 10,’ he said.
Before getting involved in the MTV EXIT anti-trafficking campaign, Jay Park has already been an advocate for causes.
In August last year, he was appointed as honorary ambassador of the Korean Sports Association for the Disabled (KOSAD).
Jay Park said it started when he and his Art of Movement (AOM) crew performed at the 2nd International Paralympic Youth Camp in Korea held in July last year.
“My dad knows the head of the disabled athletes. He basically said, ‘Oh you wanna go perform?’ last year. And me and my crew was just like yeah, we’ll do a b-boy show. We just went and we just ‘freestyled’ for them for 10 minutes. And I guess they were thankful for that. They asked (me) to be like the official ambassador. That was cool. Anytime to help the world be a better place or just to help people,” he said.
Last September, he was appointed honorary ambassador for Jeju Island to help in the island’s campaign to be selected as one of the New 7 Wonders of Nature.
Besides his advocacies, Jay Park talked about his career plans for next year.
He announced that his new single “Girlfriend” will come out on Nov. 3, the same day that his first movie “Mr. Idol” will be released in Korea.
“I have a single coming out on Nov. 3. It’s called ‘Girlfriend,’” he said.
He added that he’s very excited about the movie.
“'Mr. Idol’ comes out Nov. 3 also. I’m very excited for that. It’s my first movie. I already watched it a couple of times actually. It turned out better that I thought,” Jay Park said.
Bulletin Entertainment also asked him about his plans for next year and he revealed that a new album will come out in January and a concert is also being planned.
“I have my official album coming out next January, (containing) like 14 songs.  And after that, probably like a concert. Then I wanna work on some English songs,” said Jay Park.
He is known for sporting tattoos and he said he is planning to add another on his arm.
Pointing to his left arm, he said, “I have a little bit of space right here. It will be for b-boy and hip hop, I guess. This arm’s kinda like musical and really artsy.”
Because of his tight schedule, Jay said he wouldn’t be able to spend more time in the Philippines as he was scheduled to fly back to Korea Sunday night. He said he had a wonderful time in the Philippines.
“It’s been great. It kinda sucks that I have to leave tonight. I wish I could stay a little bit like at least two to three days to see the sights, to eat some more food, to chill a little bit but it’s been good. People have been good to me,” he said.
He thanked his Filipino fans for their continued support.
“Thank you for all your support. Every time I come here you guys show me a lot of love. I didn’t even know that I had these many fans here,” Jay Park said.
Article link:
http://www.mb.com.ph/articles/339603/jay-park-tadl-album-my-greatest-achievement-so-far
at 9:48 AM