2NE1 to hold world tour in Manila in May

By JONATHAN HICAP, Manila Bulletin
K-pop girl group 2NE1, composed of CL, Park Bom, Sandara Park and Minzy, will be launching their second world tour next year and the Philippines is one of the stops.
YG Entertainment, 2NE1′s agency, announced that the girls will start their 2014 World Tour in March. 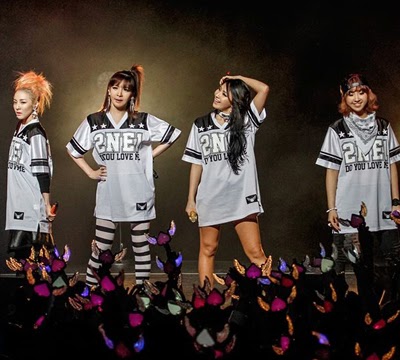 They will kick off the concert tour on March 1 and 2 at the Olympic Park’s SK Handball Stadium in Seoul.
The tour will cover 13 cities in nine countries and additional cities may be included.
In the Philippines, 2NE1 will hold the concert on May 17 at the Mall of Asia.
2NE1 member Sandara Park said the date is special as this is the group’s anniversary.
“Sa May 17 ang concert namin sa Manila. Sobrang special ang araw na yan dahil 5th anniversary ng 2ne1 ang May 17!!! Yeah! Magcelebrate tayo! (Our concert in Manila will be on May 17. This a special date as it will be 2NE1′s fifth anniversary on May 17. Yeah! Let’s celebrate!),” she tweeted.
2NE1 held the first TV performance of their debut song “Fire” on May 17, 2009 on SBS “Inkigayo.”
From Seoul, 2NE1 will hold the world tour at the Asia World Expo in Hong Kong on March 22, Singapore Indoor Stadium in Singapore on April 4, University of Taipei gym in Taipei, Taiwan on April 26 and 27, Impact Arena in Bangkok, Thailand on May 9 followed by the Philippines.
2NE1 will hold the tour at Yokohama Arena in Yokohama, Japan on July 5 and 6, and Kobe World Hall in Kobe, Japan on July 12 and 13.
The concerts will also be held in China, Malaysia and Singapore.
This will be the second time that 2NE1 will hold a concert in the Philippines. They were in the country in June 2011 for “The Party” held at the Araneta Coliseum.
Last year, 2NE1 held their first “New Evolution” world tour in South Korea, US, Japan, Taiwan and Singapore.
The US leg was chosen by a New York Times critic as one of the best concerts of 2012.
Link to my original article on Manila Bulletin online
http://www.mb.com.ph/2ne1-to-hold-world-tour-in-manila-in-may/