K-pop girl group Apink made their debut performance in the Philippines in a large scale, joining global artists at the MTV Music Evolution Manila held June 24 at the Mall of Asia concert grounds.
The six-member girl band composed of Eunji, Chorong, Bomi, Naeun, Namjoo and Hayoung debuted in the K-pop scene in 2011. 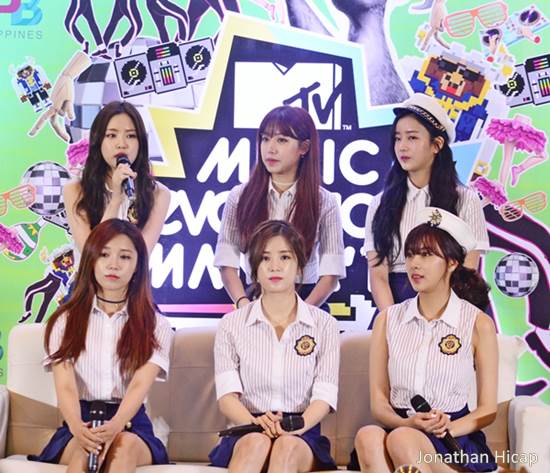 For the Manila show, Apink performed along with One Republic, Far East Movement, Bebe Rexha, Gary Valenciano, Gab Valenciano, James Reid and Nadine Lustre.
Last September, Apink joined Jason Derulo, Carly Rae Jepsen, Sekai no Owari and Stacy at the MTV World Stage Malaysia 2015 in Selangor.
During the press conference, Apink talked about their music and their first visit to the country.
They released their second studio album “Pink Memory” in August last year and fans await their next Korean album.
“We will be releasing our next album first before having our concert in Korea. You guys have to wait a little bit more because we prepared a lot of new songs for the album,” revealed Chorong.
Eunji, who released her first solo album last April, said they are completing the album as fast as they can. 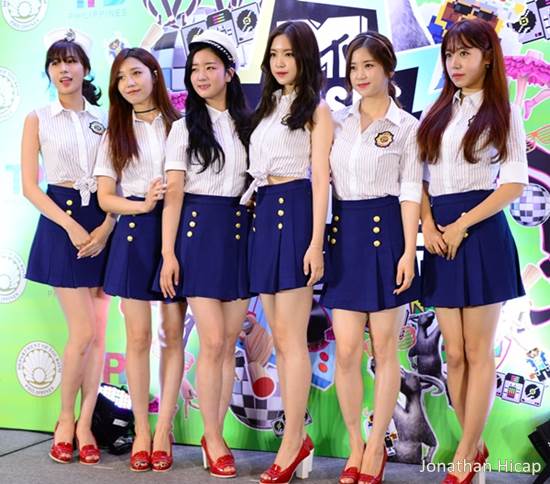 “We’re doing our best to finish the album as soon as possible for the fans. You have to wait a little bit longer,” she said.
Asked for more information on their comeback, Eunji said, “We’re not sure about everything so we can’t reveal much. What I’m sure is that you are going to love the songs and we’re doing a lot for the title song.”
Recently, the group’s agency announced that Apink will do a reality show featuring members doing extreme adventure challenges. It will premiere on Naver in August.
“Every member will be traveling to a different country. Some of the members have not filmed yet but expect us to be more lovely and lively (on the show),” Hayoung said.
Apink said they are honored to be part of the MTV Music Evolution Manila and are excited over it.
“It’s an honor for us to be here in front of you. And it’s our first time meeting our fans but we are so happy that a lot of you guys came here for us,” Naeun said.
Eunji added, “We can’t wait to meet our fans. We’ll do our best at the concert.”
During the show, Apink performed their songs “Mr. Chu,” “Luv,” “Remember” and “NoNoNo.”
Apink said they would love to come back to the Philippines.