By JONATHAN HICAP, Manila Bulletin
When Yim Siwan debuted as a member of K-pop boy band ZE:A in 2010, he also jump-started his acting career with some supporting roles in several Korean dramas.
He has made a great leap since, scoring his first-ever solo lead role in “Misaeng,” a drama series that started airing on CJ E&M’s tvN on Oct. 17. 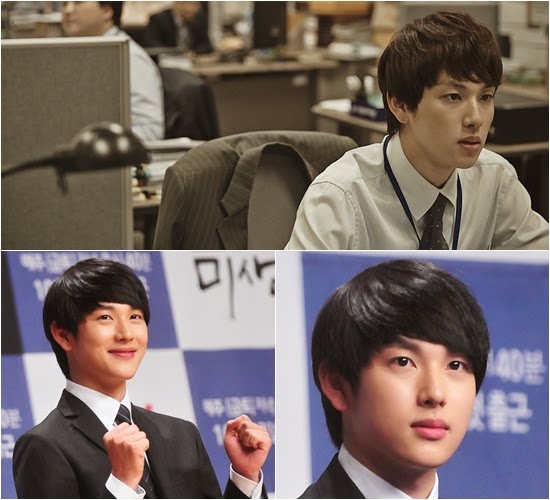 Also starring Kang So-ra, Lee Sung Min and Kang Ha Neul, “Misaeng” is based on the popular webtoon by Yoon Tae Ho. It tells the story of a failed professional Go player named Jang Geu-rae, who ends up working as a used car salesman.
Before “Misaeng” was conceptualized as a TV drama, a prequel — titled “Incomplete Life: Prequel,” which incidentally also starred Siwan — was showcased at the 17th Puchon International Fantastic Film Festival in South Korea last year.
Siwan told Bulletin Entertainment how happy he was when he landed the same role twice.
“I am attracted to the Jang Geu-rae character so much. I have always wanted to be a part of the drama version. I am so excited that it became a reality,” he said.
Siwan maintained that many could relate to Jang Geu-rae.
“He represents an ordinary person who can be anyone in real life. He could be somebody who sits next to you in the office, subway, restaurant and so on,” Siwan explained.
Siwan admits to being pressured to deliver in his first solo starrer. “But I think it is enjoyable pressure,” he said.
When asked to rate himself as an actor, Siwan said, “It is hard to rate myself . I hope I rate well to fans of the drama.”
Siwan has won several awards in the past including Best New Actor for his role in the 2013 film “The Attorney” at the 9th Max Movie Awards.
His message to his Filipino fans waiting to see “Misaeng” was: “I hope my fans from the Philippine enjoy the drama. I would love to meet them soon.”
Link to my original article on Manila Bulletin online:
http://www.mb.com.ph/exclusive-zeas-siwan-grabs-first-solo-lead-in-misaeng/

To contact the author, send email to sangchusan(at)gmail.com
at 10:16 PM