The Korean police raided the offices of the sponsor and organizer of the 1st Pangyo Techno Valley Festival on October 19 as investigation was launched to know their culpability following the concert tragedy.
Sixteen people died and 11 were injured when a ventilation grate they were standing on collapsed during the K-pop concert in Gyeonggi Province in South Korea last October 17. 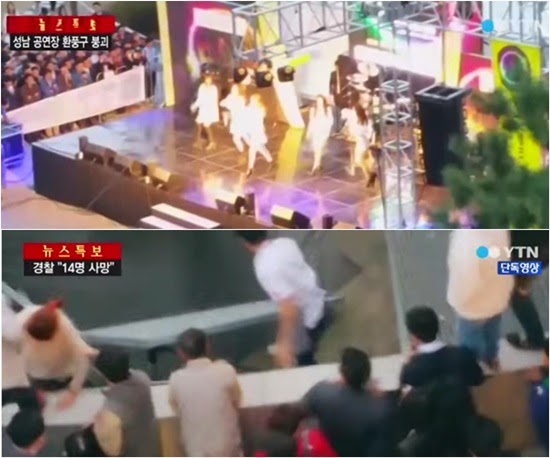 The festival, held in Bundang, Seongnam City, featured the performances of 4Minute, T-ara, Junggigo, 2BiC, TransFixion and Cherry Filter.
The accident happened during 4Minute’s performance. A video of the concert showed that 4Minute members were unaware that the accident occured and continued to perform on stage.
The police went to the offices of Korean news site Edaily, the organizer of the concert, and Gyeonggi Institute of Science and Technology Promotion (GSTEP) to gather documents and questioned personnel.
One of the GSTEP officials, surnamed Oh, who was reported to be responsible for safety planning for the concert, was questioned by the police. Oh was found dead hours later in an apparent suicide.
Oh posted messages on Twitter before his death in which he apologized.
“I have done my best to live diligently, but something I could never have imagined has occurred. I am sorry for my colleagues and for those who died from the accident. My heart is apologetic. I hope you know my sincerity,” he said, according to Korea JoongAng Daily.
Based on their investigation, the police said no persons were assigned to secure the concert, which was held at the Pangyo Techno Valley Square.
In an editorial, Edaily apologized for the accident.
“We express our deepest sympathy for the victims and survivors,” the news site said.
Cube Entertainment, 4Minute’s agency, clarified that there were other performers besides 4Minute in the concert and the girl group did not know about the accident while they were on stage.


4Minute members Hyuna and Gayoon canceled their scheduled appearances at fashion shows last October 19 and 20 because of the concert accident.
at 8:12 AM