MANILA, Philippines - Fans are angry that one of Korea's most popular hallyu stars has suffered another humiliation in his own country when he was left out in the TV broadcast of the opening ceremony of the 32nd National Para Games in Korea. 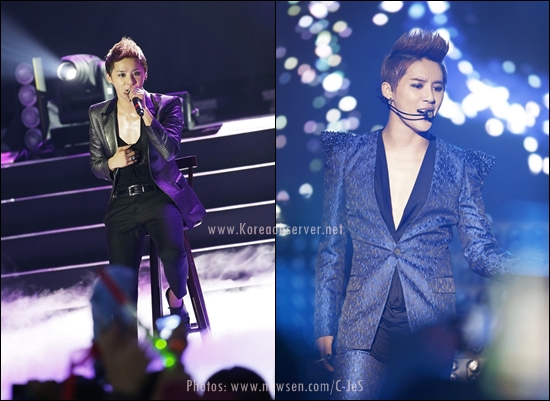 Boy band JYJ member Junsu's spot was excluded on the official KBS broadcast of the opening ceremony apparently due to the ongoing ban on JYJ to perform on any TV channel in Korea.
This stemmed from the ongoing lawsuit between JYJ members Jaejoong, Yoochun and Junsu, and SM Entertainment, which has been dragging for three years.
During the Games' opening ceremony, the emcee introduced boy band ZE:A as the last performer in the program despite that Junsu was the last artist scheduled to sing.
After ZE:A finished their song, fans saw KBS crew packing their cameras and leaving.
Junsu was then introduced and he performed on stage.
This angered fans and lamented how JYJ members were being treated in their own country.
On Twitter, Junsu said what was more important was that he met the fans at the event.
“Although I wasn’t able to make it on the broadcast, because it was a place where I could meet with all of you, it was a very enjoyable and meaningful experience. I hope that everyone will remember that happy feeling and get home safely. I love you,” he said, according to ENews World.
Sony Music songwriter Bruce Vanderbeer, who produced Junsu's single "Uncommitted," tweeted to Junsu, “Being censored in your own country is awful, yet you went on and performed. You’re an incredible artist! And I admire you!”
After the uproar, the Gyeonggi-do National Para Games Support Team posted an apology to the public on the Games' website.
Here's the complete letter as translated by ENews World:
"We deeply apologize.
"We were unable to oversee the smooth progression of the opening ceremony of the 32nd National Para Games on October 8, which caused a lot of concern over time and maintenance and for this, as organizers of the event, we would like to say we are truly sorry.
"Also, in addition to Kim Junsu (Xia), we would like to apologize once more for the fans from all over who came even from the morning for this event.
"We will ensure that such an incident never occurs again.
"The following is a response we would like to give to JYJ Kim Junsu (Xia).
"Regardless of any relations with radio or public broadcasting, we had long deliberated on the final ending (finale) artist who showed both popularity and fame which was why we directly contacted C-Jes to request for Kim Junsu, after deciding on Kim Junsu, and C-Jes Entertainment also made a difficult decision but agreed to send Kim Junsu for the meaningful event for the disabled.
"During the recruiting process we were also planning with other agencies and companies, in addition to JYJ’s Kim Junsu and C-Jes, for this event and came to settle on a full schedule for the opening ceremony after discussions with all parties.
"Additionally, after fully concluding recruiting negotiations, we received the performance MRs two days before the event and to ensure a high quality performance, we carefully planned the lighting memory setting, VJ video separately and oversaw all the lighting, audio, camera and all the system for the finale stage.
"As for Kim Junsu being introduced after the ending of the broadcast, we discussed this and both sides came to an agreement that following the radio broadcast’s recording and after the closing words, Kim Junsu would be introduced by Kim Chang Ryul and we proceeded as such after reaching an agreement with [C-Jes] on how and when Kim Junsu would emerge.
"As for the marketing material, [Kim Junsu] agreed to perform just a few days before the day of the event which was why he was absent from the initial printing and why we later rushed to print out additional marketing material and plank cards with him included in it.
"And regarding the guests leaving after the event’s conclusion and the order becoming disorderly, we were unable to think to that extent and we apologize for those that came first.
"We have issued an apology to the CEO of the security guard agency.
"And on the cameras packing up, which a few of the event’s guests saw, the supervising broadcast station, KBS, left after the official end of the event (KBS only records the official events).
"The congratulatory events are all fully recorded by us and so we would like to ensure everyone that, in addition to Kim Junsu, not a scene from the event has been lost until its very end.
"However, we would like to apologize once more for not having given a detailed explanation to everyone and you may confirm all of this with C-Jes.
"We would like to thank Kim Junsu, who came on behalf and for the interest of the disabled, and C-Jes Entertainment and we, as the ultimate organizers responsible for the event, would like to apologize to everyone for giving any discomfort," according to the Gyeonggi-do National Para Games Support Team.
Link to my original article:http://www.mb.com.ph/articles/376951/jyj-suffers-another-humiliation-in-south-korea
at 2:46 PM