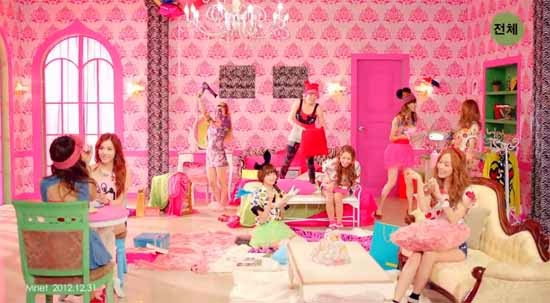 Tiffany represented Girls’ Generation and received the award.
The Korean girl group’s music video was uploaded on YouTube on Dec. 31, 2012 and has racked up 73.98 million videos to date.
The music video nominees were announced last Oct. 21 and were based on views, likes, comments and subscriptions in the last year from September 2012.
Votes were counted based on totals shares on Google+, Twitter and Facebook.
There are six categories in the awards: Video of the Year, Artist of the Year, Response of the Year, YouTube Phenomenon, YouTube Breakthrough and Innovation of the Year.
Rapper Eminem won the Artist of the Year, which was “based on total number of views, likes, shares, comments and subscribers.”
He edged out Psy, whose “Gangnam Style” is the most watched video on YouTube with 1.8 billion views to date. Other nominees for the Artist of the Year were Epic Rap Battles of History, Justin Bieber, Katy Perry, Macklemore & Ryan Lewis, Nicki Minaj, One Direction, Rihanna and Taylor Swift.
Lindsey Stirling and Pentatonix’s “Radioactive” won the Response of the Year, “the top ‘unofficial’ fan videos on YouTube based on your views, shares and other activity.”
Other nominees in the category were Boyce Avenue feat. Fifth Harmony’s -”Mirrors,” Jayesslee’s “Gangnam Style,” ThePianoGuys’ “Titanium / Pavane and Walk Off the Earth feat. KRNFX’s “I Knew You Were Trouble.”
Psy’s “Gangnam Style” lost in the YouTube Phenomenon category to Taylor Swift’s “I Knew You Were Trouble,” which generated “the biggest number of fan responses.” Other nominees were “Diamonds,” “Harlem Shake,” and “Thrift Shop.”
Macklemore & Ryan Lewis won the YouTube Breakthrough award for having the “highest growth in views and subscribers over the past year.” Other nominees were Kendrick Lamar, Naughty Boy, Passenger and Rudimental.
DeStorm’s “See Me Standing” won the Innovation of the Year, which recognized the most unique concept and creator in music videos on YouTube. Other nominees were Anamanaguchi’s “ENDLESS FANTASY,” Atoms For Peace’s “Ingenue,” Bat For Lashes’ “Lilies,” and Toro Y Moi’s “Say That.”
The awards ceremony was held at Pier 36 in in New York City and showcased live performances by Eminem, Lady Gaga, Earl Sweatshirt, Tyler the Creator, Arcade Fire, Avicii, M.I.A. and Walk Off the Earth.

Link to my original article on Manila Bulletin online http://www.mb.com.ph/girls-generation-wins-youtubes-video-of-the-year/
To contact the author, send email to sangchusan(at)gmail.com


Don't miss any updates. Subscribe to this blog, add me to your Google+ circle or click the Google Friend Connect on the sidebar
at 11:08 PM