MANILA BULLETIN: Infinite: We came back to Manila for our passionate Pinoy fans

By JONATHAN HICAP, Manila Bulletin
When Korean boy band Infinite visited and performed in the Philippines for the first time last January, they said they were deeply moved by the response of Filipino fans. 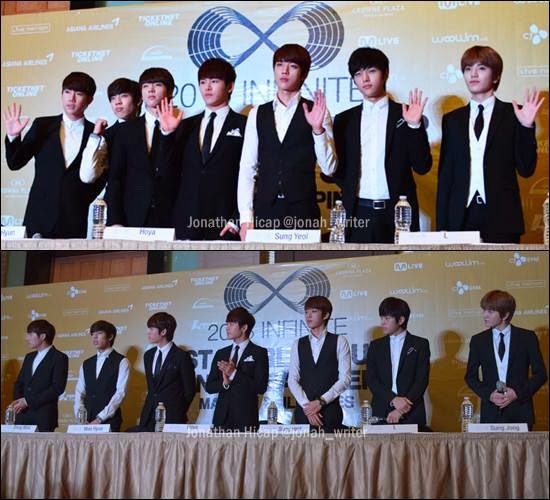 This warm reception given by Pinoy fans is the main reason they returned to the Philippines.
“We were touched by the fans. They were so many and very passionate,” Infinite said at their press conference held at Crowne Plaza Manila Galleria.
Infinite members Sungkyu, Dongwoo, L, Hoya, Woohyun, Sungyeol and Sungjong arrived in Manila in the morning of Nov. 2 and met the local press in the afternoon.
This time, Infinite will hold their “2013 Infinite 1st World Tour: One Great Step” in Manila tonight starting at 7 p.m. at the Smart Araneta Coliseum.
“We are so excited to see our fans again,” said Infinite, which debuted in the K-pop scene in 2010. 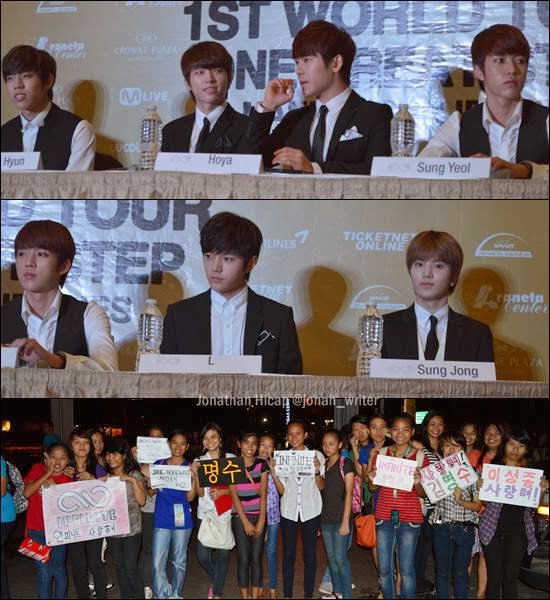 Infinite launched their world tour last August in Seoul and they have since performed in Indonesia, Japan, Thailand, Taiwan, Malaysia and China. The Philippines will be the group’s last Asian leg.
Last March, Infinite released their fourth mini-album “New Challenge” that includes the chart-winning track “Man in Love.”
The group followed up “New Challenge” with the single “Destiny,” which is part of the single album of the same title released last July.
“Destiny,” Infinite said, “exudes manly performance, believing on our true love for our destiny. And we expect more manly performance on stage.”
Hoya said the title track is about their fans.
“Just for the title ‘Destiny,’ we want to emphasize that our fans are our destiny,” he said.
Infinite members have their hands full with their world tour and other activities. During their spare time, they enjoy sleeping, calling their friends and family, swimming and taking pictures.
Asked about the Philippines, Sungkyu said he knows about Boracay.
“We really want to visit (the place),” he said.
For the Manila tour, Dongwoo brought his parents.
For their ” 2013 Infinite 1st World Tour: One Great Step” in Manila concert, L said they prepared solo stages for the fans.
“You will see us perform our songs that we have performed on TV. We have also prepared our solo stages. Maybe you can come, join us and enjoy the concert,” he said.
Infinite’s world tour has brought them to different countries. They said the most unforgettable moment during the tour was when fans waved banners of support.
“During the ending of one of our stages, all the fans showed banners which read, ‘We should stay forever, let’s go forever.’ We were really motivated and inspired by our fans,” they said.
After holding their concert in the Philippines, Infinite will be heading to the US to hold concerts in Los Angeles, San Jose, New York City and Silver Spring in Maryland.
The group will also embark on their European tour in London, Paris and Frankfurt.
Infinite said they want to take a rest after their world tour and maybe release a new album next year.
“After our concert in Manila, we are going to the US and then to Europe. After our final stage in Dubai, we want to have a little bit of vacation. We want to take a rest for a while. Maybe we will introduce our new album next year,” they said.
Infinite thanked their Filipino fans for their support.
“We really can’t forget our fans. They are so passionate and welcoming us all the time. We expect a lot from the concert. Our fans should look forward to the concert and enjoy the concert. We really want to have good memories with our fans. We love you Inspirits,” Woohyun said.
The “2013 Infinite 1st World Tour: One Great Step” in Manila is organized by the Araneta Group’s Uniprom Inc. and supported by Asiana Airlines, Pepsi, Crowne Plaza, Astroplus, Myx, JAC Motors and When in Manila.

Link to my original article on Manila Bulletin online http://www.mb.com.ph/infinite-we-came-back-to-manila-for-our-passionate-pinoy-fans/
To contact the author, send email to sangchusan(at)gmail.com


Don't miss any updates. Subscribe to this blog, add me to your Google+ circle or click the Google Friend Connect on the sidebar
at 1:57 PM

Email ThisBlogThis!Share to TwitterShare to FacebookShare to Pinterest
Labels: Infinite