By JONATHAN HICAP, Manila Bulletin
K-pop stars descended on the famous Gangnam area in Seoul for the opening ceremony of K-Star Road, home to various entertainment agencies, shops, restaurants and attractions.
The K-Star Road is a kilometer stretch in Cheongdam and Apgujeong in Gangnam that features giant toys that carry the names of K-pop groups such as Girls’ Generation, 2PM, FT Island, CNBLUE, SHINee and Super Junior. 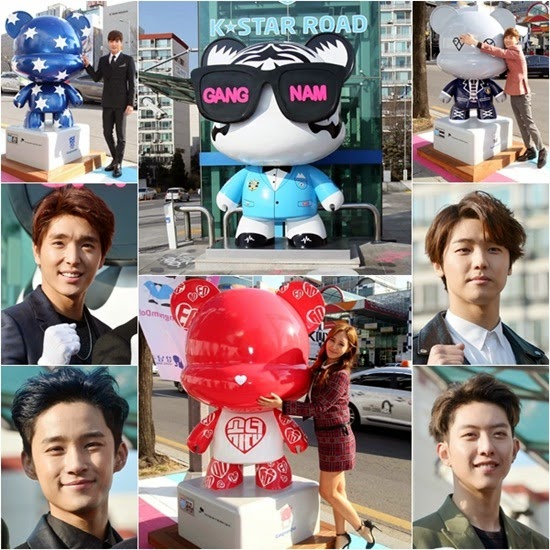 The project hopes to attract tourists to the area, which is also home to luxury shops.
According to the Gangnam Tourist Information Center, the K-Star Road is the first project under K Roads, listing Hallyu stars’ favorite hangout spots and their agencies.
Gangnam, the center said, “has been the most stylish and trendiest area in Seoul” even before Korean rapper Psy made it famous through his global hit “Gangnam Style.” The area is also used as for Korean films and dramas.
Last year, more than 14 million tourists visited South Korea.
The number of Filipino tourists that went to Korea last year increased to more than 434,000 from more than 400,000 in 2013, according to the Korea Tourism Organization Manila office.
This year, the target is for 450,000 Filipinos to visit South Korea.
Read more at http://www.mb.com.ph/k-pop-stars-grace-opening-of-k-star-road-in-gangnam/#jelQ45KsIc7Uc3OQ.99

To contact the author, send email to sangchusan(at)gmail.com
at 7:31 PM