By JONATHAN HICAP, Manila Bulletin
EXO’s Kai was injured when he fell into a lift hatch during a recent concert that formed part of their “EXOPLANET #2: The EXO’luXion,” tour launched March 7 at the Olympic Gymnastics Arena.
The incident was caught on a video posted by a fan on YouTube. 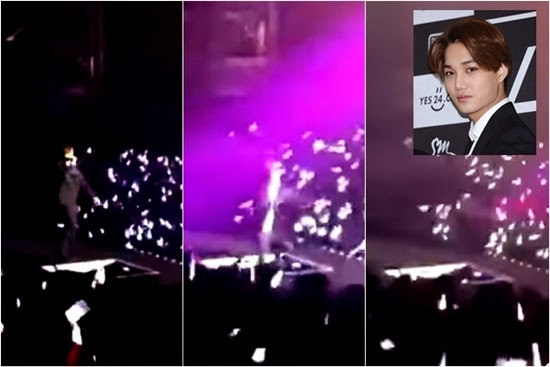 Kai was not able to take part in the “Growl” portion of the concert.
At a press conference held the following day, Kai assured fans that he was okay and that he is already recovering from the injury he sustained during the fall.
“I’m sorry for worrying the fans,” he said.
Not a few noticed however, that he still can’t fully move his right hand.
This is the second time this year that a Korean singer fell into a lift hatch while performing.
Last January, Taeyeon fell into a lift hatch during the 24th Seoul Music Awards.
EXO will have another set of concerts in Seoul from March 13 to 15.
Suho, the band’s leader, expressed elation with the concert series.
“I didn’t know that we’d be having a concert (this early),” he said, according to EnewsWorld. “I’m happy to be meeting with many fans.”
When asked why EXO’s concerts are so popular, Suho said, “There are many things to watch at the concerts… we have many members each with unique traits.”

To contact the author, send email to sangchusan(at)gmail.com
at 10:33 PM

Email ThisBlogThis!Share to TwitterShare to FacebookShare to Pinterest
Labels: EXO