By JONATHAN HICAP, Manila Bulletin
Super Junior-D&E composed of Donghae and Eunhyuk, have released their first studio album titled “The Beat Goes On.”
Digital copies of the album were released online last March 6. The physical copy was released on March 9. 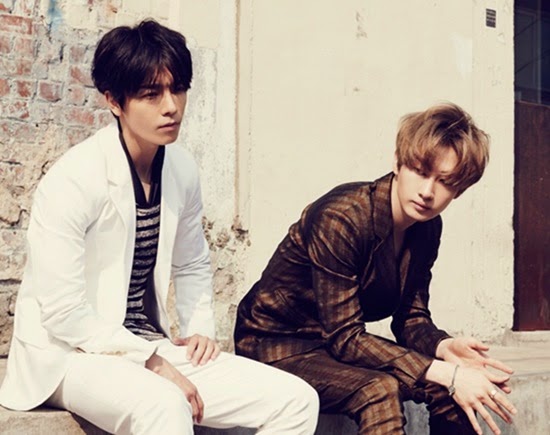 “The Beat Goes On”  zoomed to No. 1 on iTunes’ albums chart in Singapore, Thailand, Vietnam, Macau and Hong Kong upon its release.
On the “Ask In A Box” program on 1theK’s YouTube channel, Donghae and Eunhyuk answered questions from fans about the album.
Asked why they were picked as sub-unit of Super Junior, Donghae said that it was because they “have similar taste in music.”
“We also like the same kinds of dance styles. So it was kind of a strategic thing,” he added.
Donghae revealed that his favorite song in the album is “Mother,” a track which he composed along with Team One Sound. Eunhyuk picked “Growing Pains.”
If they were given the chance to travel abroad, Donghae said he would like to visit Singapore. Eunhyuk picked Switzerland.
About the song “Growing Pains,” Donghae said, “(it) will go well with the spring weather.”
“There couldn’t be a better title,” Eunhyuk said.
“We worked hard to put the song together, so please enjoy,” Donghae told fans urging them to purchase the album.
When asked which Super Junior member was the most jealous when they began performing as a unit, they mentioned Ryeowook, Kangin, Leeteuk and Siwon.
“KangIn was pretty straightforward,” Eunhyuk said. “He said he’s jealous.”
Donghae said, “(Kangin) wrote on his SNS account, ‘Everyone’s congratulating the unit. But I’m jealous, so I’m going to watch how well they do.’”
The two were asked how would they rank themselves in Super Junior in terms of looks.
Donghae ranked himself second behind Siwon while Eunhyuk ranked him third.
Donghae ranked Eunhyuk him ninth while Eunhyuk ranked himself second.
Donghae thanked fans for sending their questions and said, “We’ll be performing in Korea a lot more now.”
“Please look forward to ‘Growing Pains’ and keep the love and support coming,” he said.
It was in 2011 when the duo released their first single “Oppa, Oppa.”

To contact the author, send email to sangchusan(at)gmail.com
at 10:27 PM