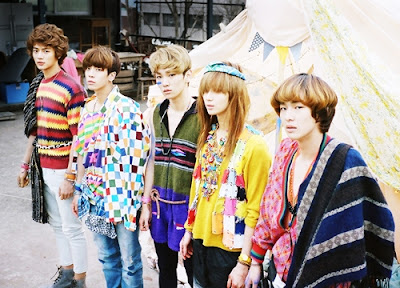 The album contains seven songs including the title track “Sherlock” and “Honesty,” which was written by SHINee’s main vocalist Jonghyun.
On Billboard, “Sherlock” debuted at No. 5 on the World Albums chart, achieving the biggest jump on the list.
“Sherlock” also debuted at No. 10 on the Heatseekers Albums chart, ranking fifth for the albums on the chart that achieved the biggest jump for the week.
It also ranked No. 48 on Billboard’s Independent Albums chart.
On iTunes Japan, the album ranked No. 10 on the Top 10 Albums and No. 4 on the Top 10 Pop Albums charts.
“Sherlock” is also blazing its way in the South Korean charts, topping the weekly chart for the period March 19 to 25 on Hanteo, selling 56,768 copies since its release. It also became No. 1 in other music charts.
On YouTube, SHINee’s music video for “Sherlock” has garnered 3.3 million views since it was released last March 22, garnering the bronze ranking in the Recently Most Popular videos and silver ranking in the Trending videos on the site.
The choreography for “Sherlock” was done by Tony Testa, who has worked with Kylie Minogue, Britney Spears and Janet Jackson.
SHINee started promoting “Sherlock” on TV music shows last week on “M! Countdown,” KBS “Music Bank,” MBC “Music Core,” and SBS “Inkigayo.”
SHINee is composed of Jonghyun, Onew, Taemin, Key and Minho.
Link to my original article: http://mb.com.ph/articles/355532/shinees-new-album-debuts-billboard-charts
at 6:00 PM

Email ThisBlogThis!Share to TwitterShare to FacebookShare to Pinterest
Labels: SHINee