Girls' Generation Touted As The Next Psy

MANILA, Philippines - Nine-member Girls' Generation is touted to follow in the footsteps of rapper Psy in becoming the next world music sensation, according to a British newspaper.
The Guardian said the girl group is set to release its first English album early next year through Interscope Records. 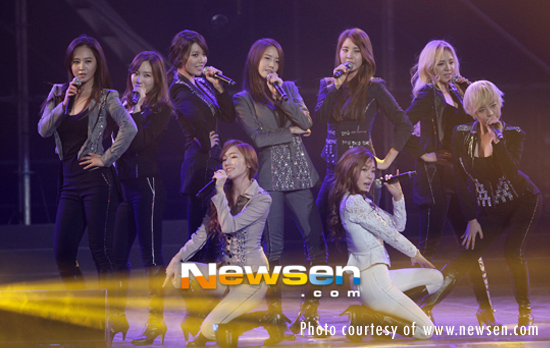 "It now seems certain that [Psy] has blazed a trail. Girls' Generation , a nine-member Korean girl group who had racked up millions of sales throughout east Asia long before Psy made "air" horseriding socially acceptable, are poised to release their first album recorded entirely in English," wrote Justin McCurry for The Guardian's "The Observer."
The newspaper said Girls' Generation is the "obvious choice to take up Psy's mantle in the UK, where artists who sell millions of albums in Korea and Japan are known only to a small number of K-pop devotees."
Psy made history by being the first Korean singer to top the UK singles and streaming Top 100 charts with "Gangnam Style." The hit single won Psy the Best Video award in the recent MTV Europe Music Awards and New Media award at the American Music Awards.
The Guardian said Girls' Generation has been at the top of hallyu, or Korean wave, and has successfully penetrated the Japanese music market.
Steve McClure, executive editor of McClure's Asia Music News, told The Guardian that he is not surprised by Girls' Generation's success.
"It doesn't surprise me at all that Girls' Generation are doing this. The South Korean market is limited, so winning over new fans overseas has always been part of the K-pop strategy. The fact that they are riding on the coat tails of Psy is just pure luck – it has just made it easier than it might have been without him," McClure said.
The newspaper said since its debut, Girls' Generation has sold 30 million in digital singles and 4.4 million albums. Last year, Girls' Generation earned $88 million.
Robert Poole, chief executive of Asian music promoter SomethingDrastic, told The Guardian that the girl group's songs "are infectious pop."
"It's hard not to like Gee, and as soon as I heard Mr. Taxi, I thought they had to make an English version," he said.
Mio Scobie, overseas editor of Us Weekly magazine, praised Girls' Generation.
"Girls' Generation totally fit the bill. They produce feel good beats, instantly memorable choruses and, as I'm sure people have already noticed, they're stunning," Scobie said to The Guardian.
Scobie added that Girls' Generation has loyal fans.
"The album will be a hit regardless of how many new listeners jump on board. Girls' Generation fans are fiercely loyal and will be ready to buy and download in their droves," Scobie said.
McClure credited Psy for opening the door for other Korean singers.
"If Psy pushed open the door to an unsuspecting international fan base, Girls' Generation could be the second stage in K-Pop's assault on Britain, McClure says. Fellow girl group2NE1 and boy band Super Junior are rumoured to be preparing material for release in the UK, while Psy has promised to record an English-language follow-up to Gangnam Style," The Guardian said.
Girls' Generation will visit the Philippines early next year and perform at the Dream K-pop Fantasy Concert slated on Jan. 19 at the Mall of Asia open grounds.
Link to my original article on Manila Bulletin online: http://www.mb.com.ph/articles/382402/girls-generation-touted-as-the-next-psy

Email me at sangchusan(at)gmail.com
at 9:43 PM