MANILA, Philippines - Korean rapper Psy has been nominated in the 2013 People's Choice Awards.
His hit single "Gangnam Style" will be vying for the Favorite Music Video award along with Justin Bieber's "Boyfriend," Carly Rae Jepsen's "Call Me Maybe," Katy Perry's "Part of Me," and Maroon 5's "Payphone." 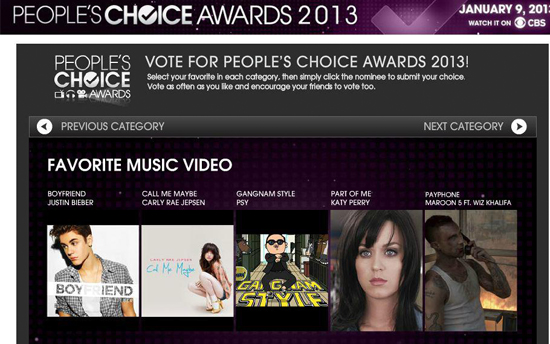 The People's Choice Awards "continues to be the only major awards show voted on entirely by the public for fan favorites in music, movies and television."
Psy's nomination comes after his win in the MTV Europe Music Awards where he brought home the Best Video award.
He is also set to pick up the new media award at the American Music Awards on Nov. 18.
People magazine said, "[Psy] will receive a trophy for his hit single – which has now racked up more than 717 million video clicks – during the Coca-Cola Red Carpet LIVE! at the 2012 AMAs pre-show. Psy will also perform his catchy tune during the show itself."
The People's Choice Awards 2013 will air on CBS on Jan. 9.
Here's the complete list of nominees:

Favorite Song
"Call Me Maybe," Carly Rae Jepsen
"One More Night," Maroon 5
"We Are Never Ever Getting Back Together," Taylor Swift
"We Are Young," Fun. ft. Janelle Monae
"What Makes You Beautiful," One Direction

Link to my original article on Manila Bulletin online: http://www.mb.com.ph/articles/381829/psy-bags-peoples-choice-awards-nomination


Email me at sangchusan(at)gmail.com
at 4:46 PM