Statement from the Korean Embassy in the Philippines regarding the 6 Nong Shim noodles that were recalled by the Philippine government:


The Korea Food and Drug Administration (KFDA) requested Nong Shim Co. Ltd. to recall the six noodle brands immediately after the former learned of the news that benzopyrene was detected recently.

But the KFDA conducted the test and issued a certificate dated November 7, 2012 that the level of benzopyrene found in the noodle powder, which ranges from 0.4 to 1.6 ppb, was extremely low and has no harmful effect on the human body. 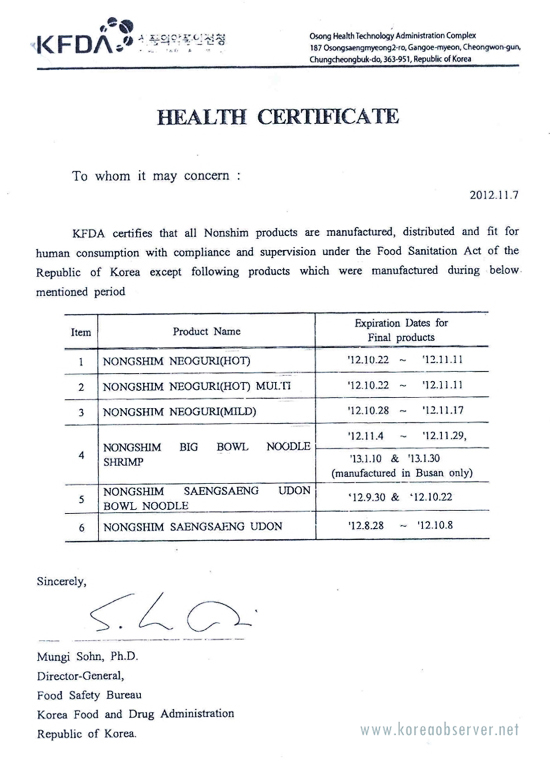 Based on the certificate issued by the KFDA, the Nong Shim Co. Ltd. is allowed to sell the six noodle brands that are now available in the Korean market without any complaints from the people. Furthermore, all foreign countries, with the exception of the Philippines and Thailand, have lifted the ban on the importation as the six noodle brands proved to be totally unharmful to the human body. Taipei authorities have also conducted its own test of the said noodle, concluding that the noodle is indeed not harmful to the consumers.

The ban on the importation is seriously impacting the exporters and importers of the Philippines and Korea as well as the image of Korean-made noodles.

Given this serious situation, the Korean Embassy requested the appropriate measures of the Philippine government including the expeditious lifting of the ban on the six Korean noodle brands.

Here's our news story on this published in the Manila Bulletin today, Nov. 10: