MANILA, Philippines - Filipino and Korean ska bands will come together for the Philippine Ska Festival, which will be held in Makati and Cebu this December.
The festival, dubbed as the "first gathering of Philippine and Korea ska," will be headlined by Kingston Rudieska, Korea's top ska band. 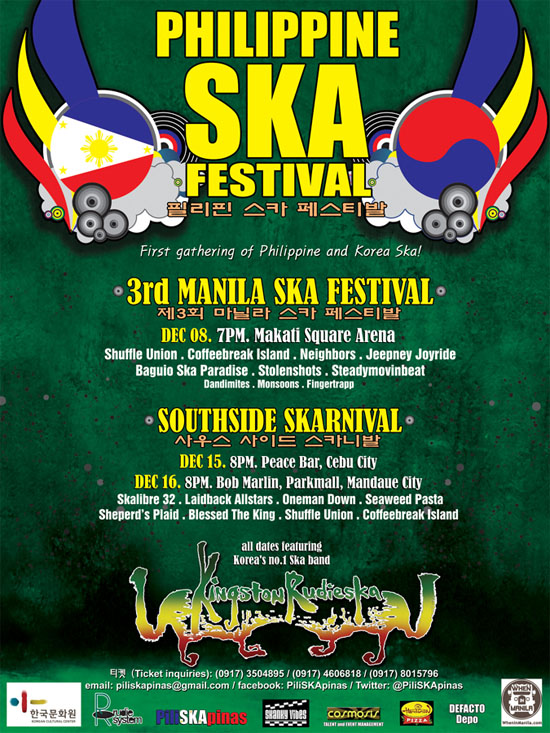 The first event, called the 3rd Manila Ska Festival, will be held at the Makati Square Arena on Dec. 8.
It will feature Kingston Rudieska along with Filipino ska bands Shuffle Union, Coffeebreak Island, Neighbors, Jeepney Joyride, Baguio Ska Paradise, Stolenshots, Steadymovinbeat, Dandimites, Monsoons and Fingertrapp.
The festival then goes to Cebu on Dec. 15 and 16 for the Southside Skarnival.
The Skarnival will be held at the Peace Bar in Cebu City on Dec. 15 and at the Bob Marlin at Parkmall in Mandaue City on Dec. 16.
Kingston Rudieska will be playing in both events together with Skalibre 32, Laidback Allstars, Oneman Down, Seaweed Pasta, Sheperd's Plaid, Blessed The King, Shuffle Union and Coffeebreak Island.
Ska music originated in Jamaica in the 1960s and is a fusion of calypso, mento, jazz and rhythm and blues.
In South Korea where K-pop is the mainstream music, Kingston Rudieska instead formed a ska band in 2004 and became the pioneer of authentic Korean ska music.
Before joining Kingston Rudieska, Choi Chul-Wook, the band's leader, was the lead guitarist of punk band Kalmaeki.
According to the band's Facebook page, Choi read a post on an online music discussion board that was calling for musicians to join a Jamaican sound band.
Thus, Kingston Rudieska was formed. The band toured from 2005 to 2008, performing in jazz clubs and rock and jazz festivals. During this period, the band performed in more than 300 concerts.
The band released its first EP in 2006.
"During these years, Kingston Rudieska caught the attention of music fans with their magnificent performance, and their sweet and catchy tunes. Kingston Rudieska's trademark is their warm and poetic sound," according to the band's biography.
Kingston Rudieska released two full-length albums: "Skafiction" in 2008 and "Ska Bless You" in 2010.
Link to my original article on Manila Bulletin online: http://www.mb.com.ph/articles/382550/top-korean-band-to-headline-philippine-ska-festival
Email me at sangchusan(at)gmail.com
at 9:53 PM