Top Korean group Girls' Generation will hold their first world tour starting in June.
The 2013 Girls' Generation World Tour "Girls & Peace" will start in Seoul on June 8 and 9 at the Olympics Gymnastics Arena. 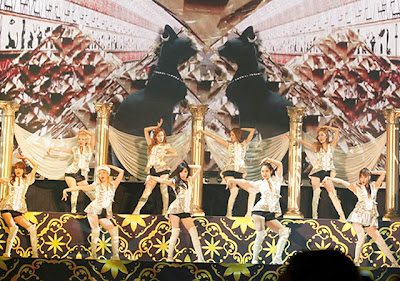 This is the first world tour for Girls' Generation since debuting in 2007. In 2011, the girls held their Girls' Generation Tour in Korea, Taiwan, Singapore, Hong Kong and Thailand.
Last April 21, Girls' Generation held their last concert in Japan called "Girls' Generation II-Girls & Peace."
The Japanese tour started last Feb. 9 and was held in seven cities including Osaka, Nagoya, Kobe and Fukuoka. A total of 20 concerts were held in Japan that drew 200,000 fans.
The tour was held to promote the group's second Japanese album "Girls Generation II: Girls & Peace" which was released last November.
"To all the fans who came to the tour, thank you so much! We were able to meet you all just about every week, so it was a very happy three months," Girls' Generation said, according to international fan site Soshifie.com.
They added, "Also, after the concerts ended, the special time when we met those backstage became precious memories.  When we opened the door to the waiting room, seeing that everyone was so happy or crying made us feel that we’re loved so much that our hearts ached. We are really~, really~ thankful for all the fans who support Girls’ Generation."
On May 29, Girls' Generation will release their seventh Japanese single "Love & Girls."
Last January, Girls' Generation released their fourth Korean studio album "I Got A Boy."

Link to my original article on Manila Bulletin online:
http://www.mb.com.ph/article.php?aid=9538&sid=4&subid=26#.UYJzcLVmiSo

Email me at sangchusan(at)gmail.com
at 6:12 PM