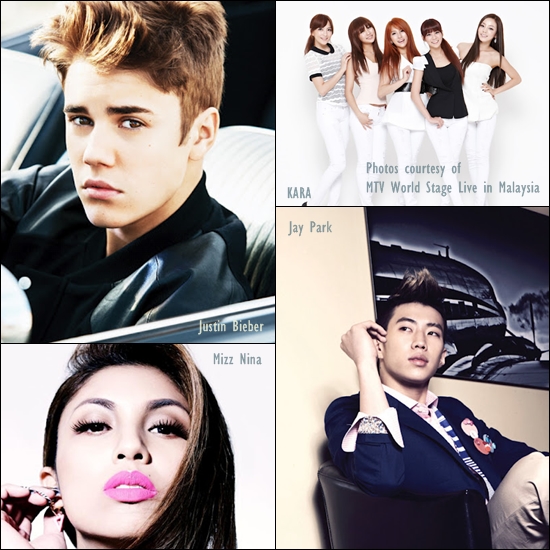 The spectacular event will be held at Surf Beach at Sunway Lagoon theme park in Petaling Jaya, Malaysia.
"It's official!!!! back to Malaysia July 14!!! Justin Bieber, Kara!" tweeted Jay Park, who is currently in California for his APAHM (Asian Pacific American Heritage Month) concert tour and meet-and-greet.
"The fans and artists will undoubtedly take the social media chatter to an all-time high, bringing MTV World Stage Live in Malaysia come to life for not only 15,000 fans at Surf Beach, but also for millions of viewers, followers and friends of MTV, Justin Bieber, Jay Park, Kara and Mizz Nina," said Indra Suharjono, Viacom International Media Networks’ executive vice-president and managing director of Asia, in a post on the MTV World Stage Live website.
(VIDEO): MTV World Stage Live in Malaysia
About 15,000 fans are expected to watch the concert, which will be aired as a two-hour show on the MTV Southeast Asia channel on July 28. Another version will be shown on the MTV global network in 150 territories worldwide.
"With worldwide album sales in excess of 15 million units, over 43 million Facebook followers and more than 22 million Twitter followers, Justin Bieber is a global phenomenon in today's pop culture and the social media scene," according to the MTV World Stage Live website.
It describes Jay Park as the next breakout singer in the US.
"With his boyish good looks, explosive dance moves and ability to both sing and rap, Jay Park has been highly touted as the next breakout star in the U.S. market," it said.
"Kara, which means 'sweet melody' in Greek, is made up of female members Park Gyu Ri, Han Seung Yeon, Goo Ha Ra, Nicole Jung and Kang Ji Young. Combining Euro dance pop, electronic dance and alternative rock, Kara made their debut in March 2007 with the release of their first album 'The First Blooming,'" the website said.
On the other hand, Mizz Nina is a singer-songwriter in Malaysia.
"In October 2012, Mizz Nina was presented the Flava Award (Hip hop/R&amp;B) at the Shout! Awards. After her win, she opened for Usher, Bruno Mars and Justin Bieber in Kuala Lumpur and went on to represent Malaysia at the New Skool Rules hip hop convention in Rotterdam in April 2011," according to the website.
Link to my original article: http://www.mb.com.ph/articles/360474/justin-bieber-kpop-stars-in-mtv-concert-in-malaysia