MANILA, Philippines - Korean singer IU has made it to Billboard's 21 Under 21, the chart's "annual ranking of music's most powerful minors."
"They've got hit records, millions of fans, and the kind of success most musicians only dream of -- and they can't even uncork a bottle of champagne to celebrate their success," according to Billboard.com. 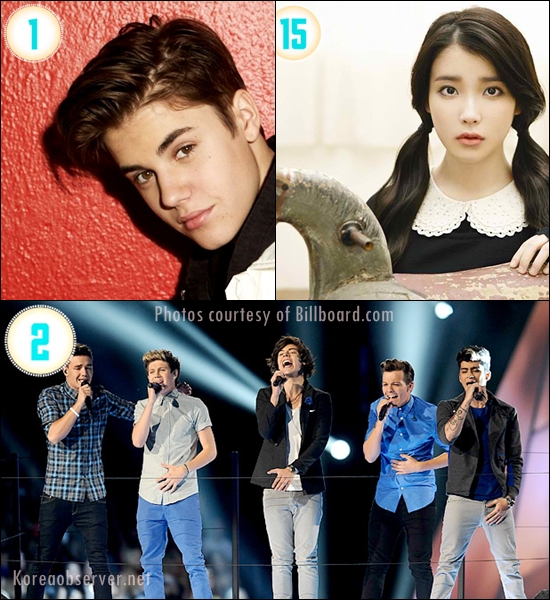 IU, who has been successful in her singing career, made the list at No. 15.
The list was topped by Justin Bieber, followed by One Direction, Demi Lovato, Scotty McCreery, Mac Miller, Selena Gomez, Porter Robinson, Cher Lloyd, Earl Sweatshirt, Nick Jonas, Jackie Evancho, Cody Simpson, Mindless Behavior, Megan & Liz, IU, Bridgit Mendler, 3BallMTY, Miley Cyrus, Madeon, Ross Lynch and Victoria Justice.
"From bubbly boy bands to hip-hop powerhouses, a sweet K-Pop princess to a trio of Mexican 'tribal guarachero' pioneers, rising EDM superstars to international pop icons, these are the fresh faces whose careers will continue to pack the biggest punches over the next 12 months," Billboard wrote.
IU debuted in Korea in 2008. She won her first TV chart award in 2010 with the song "Nagging" and continued to top sales and charts with her succeeding singles and albums.
Billboard said IU is a "bona fide superstar."
"Most South Koreans would be hesitant to label IU as 'hot' -- after all, she's affectionately known as the nation's 'little sister. But this past year, IU's unique charm and undeniable hits have made her into a bona fide superstar," according to the chart.
Billboard said IU's reign began with the release of her comeback single "You and I."
The song was named last month by Billboard as the No. 1 song on the Billboard's K-pop Hot 100 chart for the past year.
"While IU hasn't hit the same level of global viral awareness as Psy, her popularity has led to success in Japan, where she celebrated Hot 100 hits with Japanese versions of 'You and I' and her single 'Good Day.'"
This year, IU won the Bonsang Award and Best Album for "Last Fantasy" in the 21st Seoul Music Awards.
Bieber maintained his No. 1 position from last year.
"Since earning last year's crown, Bieber has snagged two more No. 1 albums -- the holiday set 'Under the Mistletoe' and the more adult-leaning full-length 'Believe' -- and converted more Beliebers with slick award-show performances, radio hits like 'Boyfriend' and 'As Long As You Love Me,' tabloid-ready pictures with girlfriend Selena Gomez and those adorable, now-legal good looks," Billboard wrote.
Billboard said Bieber "is not a boy, not yet a man, but right now, Justin Bieber is the supernova of teen pop stars with charisma, popularity and swagger to spare. Once again, it's Biebs' world, and we're lucky to live in it."
Link to my original article on Manila Bulletin Online: http://www.mb.com.ph/articles/374168/koreas-iu-makes-it-to-billboards-21-under-21-list
at 6:45 PM