2NE1's Sandara Park has finally joined Twitter under the name @krungy21, putting the description that she is the "Pambansang krungkrung ng Pilipinas" (The Philippines' national weird or unique personality).

"Krung krung" was a nickname given to Sandara when she was still active as an actress and singer in the Philippines. It means weird, unique or crazy. 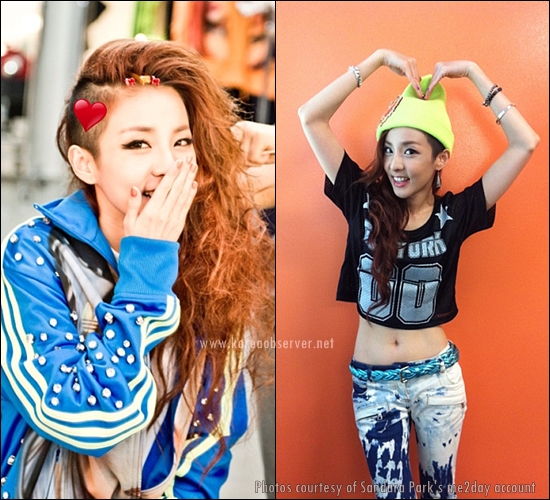 Sandara's joining Twitter was supposed to be low-key or undetected but her brother Thunder (Cheondung), a member of boy band MBLAQ, exposed her.
"Wassup!!! This is Sandara Park! I was originally going to fly under the radar but i've been exposed by my baby bro Thunder! Bwahahaha!!!^.^" she said.
Her first tweet was "stupid" for her brother for exposing her.
Since creating her account last September 17, Sandara has amassed 134,000 followers already.
"I was so surprised and moved by your warm welcome! Thank u thank u!!! Mwah! Mwah! Mwah!!! Kamusta mga krungerz~?!? (How are you, krungerz [fans of Sandara in the Philippines]?)" she posted.
Upon joining Twitter, she tweeted messages to Big Bang's Taeyang and 2NE1's Minzy, among  others.
In Philippine showbiz, she tweeted messages to actor Luis Manzano, comedian Pokwang, actress Melissa Ricks.
To Manzano, she said, "@luckymanzano koya luis!!! How r u? Ipuni to!!!"
She added, "@luckymanzano d ko alam kelan ako babalik dyan.. Sobrang nahohomesick ako!!! Puntahan mo ako sa korea~ bring sinigang na hipon for me!" (I don't know when I'll be coming back there [Philippines]. I feel so homesick. Visit me here in Korea. Bring shrimp in tamarind soup for me).
To which Manzano jokingly replied,  "Bayaran mo ticket ko? Ang casual mo humingi ng sinigang na hipon! Ano yun ilalagay ko sa bulsa ko? :p" (Can you pay for my ticket? It's easy for you to ask for shrimp in tamarind soup! Where shall I put it, in my pocket?"
On the other hand, Sandara told Pokwang, "Mommy poky!!! How r u? Luckygirl here~!!!"
"Hey baby Krung! ikaw nga ba talaga ito? Or etchoz lang? (Is it really you? Or is this just a joke?)," replied Pokwang.
"Mommy~~ ako to! Si sandara to!!! Chenelin chuva~~ (Mommy, it's me! This is Sandara!!!) ," Sandara said.
But Pokwang doubted if the account was really Sandara's.
So Pokwang asked her, "Ok what year ang muvi natin na becoz of U? Hahahahahaha." (OK, what year was our movie "Becoz of U? Hahahahahaha)
Sandara answered, "Bcoz of u!!! 2004!!! Ang location natin dun sa may train~ d lucky ones naman 2006!!! Right?!? Hohoho~" (Bcoz of u!!! 2004!!! Our location was at the train. "D Lucky Ones" [another movie] was in 2006.)
Pokwang said, "ikaw nga! Anak!" (It's you! My child!)
"@krungy21 one last question anak,what year tayo nag work together sa fantaserye Kristala at sino direktor natin? Hahahahaha (One last question, what year did we work together in the fantasy series Kristala and who was our director? Hahahahaha)," Pokwang asked Sandara.
Manzano replied to Pokwang and said, "Mama @pokwang27 , bat di ka nalang humingi ng stool at urine sample pati barangay clearance kay @krungy21 para sure ka :)" (Why don't you just ask stool and urine samples and barangay clearance from @krungy21 to make sure that it's really her?)
Satisfied with her answers, Pokwang finally told Sandara, "Anak!? Miss you so much!! :)"
"Miss u too ~!!! Ingat kau [take care] and have a nice day~! :)" Sandara said.
On me2day.net, Korea's version of Twitter, Sandara has 637,000 friends and followers. (Jonathan Hicap)
at 7:24 PM