MANILA, Philippines - Korean rapper Psy's US promotion for his hit song "Gangnam Style" has finally paid off big time.
"Gangnam Style" has debuted on Billboard's coveted Hot 100 chart at No. 64, the highest rank achieved by a K-pop artist on the singles chart since 2001. 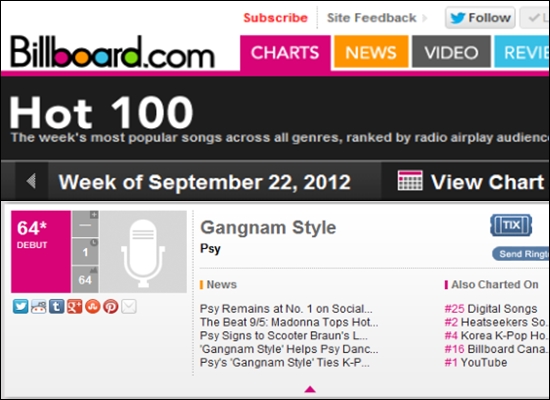 "Made my debut spotted #64 of the charts called #BillboardHot100~!!!" Psy announced on Twitter last night.
In addition, based on Billboard's latest charts released on Thursday for the week of Sept. 22, "Gangnam Style" zoomed to the No. 2 position from No. 13 last week on the Heatseekers Songs chart.

It also charted at No. 25 on Billboard's Digital Songs chart, up from No. 49 last week, and from No. 58 last week to No. 16 on Billboard Canadian Hot 100 chart.
"Gangnam Style" also maintained its No. 1 position on Billboard's Social 50 and YouTube charts. It is also No. 4 on the Korea K-pop Hot 100 chart.
Psy’s popularity is pushed even further by his appearance at the MTV Video Music Awards last Sept. 6, helping him achieve a sales increase of 94 percent for "Gangnam Style," according to Billboard.
"Psy, of 'Gangnam Style' fame, also got some VMA love. He appeared briefly on the show, dancing to his hit single with host Kevin Hart. In turn, the song earned its best sales week yet, selling a sexy 61,000 -- up 94%," the Billboard.com article said.
"Gangnam Style" also charted on iTunes. On September 14, the song is No. 1 on the iTunes music video chart. It is also No. 5 on US iTunes top 100 songs chart, its highest rank to date.
The song is also No. 1 on iTunes top 10 songs chart in Canada, Denmark, Finland, Netherlands and Norway. It is also No. 2 in Belgium, New Zealand and Sweden and No. 3 in Australia.
Following his stint at the VMAs, Psy was interviewed on ABC News' "Nightline," as well as by Ryan Seacrest on his radio show.
Earlier this week, Psy was a surprise guest on "The Ellen DeGeneres Show" for the appearance of pop star and "X-Factor" judge Britney Spears.
Psy taught Spears and DeGeneres the now famous "Gangnam Style" horse-riding dance.
"LOL, thank u @psy_oppa for the surprise dance lesson yesterday. @TheEllenShow was going off Gangnam Style!" Spears tweeted after.
Next, Psy will be heading to New York City to perform "Gangnam Style" for the first time on "The Today Show" on Friday (Saturday in Manila). The top-rating morning show is hosted by Matt Lauer, Savannah Guthrie, Al Roker and Natalie Morales.
"Today" announced that Psy would be performing on the show's Toyota Concert Series.
Scooter Braun, Justin Bieber's manager who signed up Psy under his School Boy Records, tweeted, "Haha. yes my dude @psy_oppa is performing #GANGNAMSTYLE for the first time in the US on the @todayshow this FRIDAY in NYC!! everyone come!"
Braun added that he would be flying to New York to accompany Psy.
As of September 14, the "Gangnam Style" music video has been viewed 162 million times on YouTube. It is now the No. 1 most liked video of all time on YouTube with 1.6 million likes.
Link to my original article: http://www.mb.com.ph/articles/373429/psys-gangnam-style-debuts-on-billboard-hot-100-sets-records
at 10:59 AM