By JONATHAN HICAP, Manila Bulletin
Hollywood star Brad Pitt said coming to Korea was a real pleasure and that he loved Korean barbecue the first time he was in the country two years ago.

Pitt and his nine-year-old son Pax arrived at Gimpo International Airport in Korea from Australia on June 11 to promote his new movie "World War Z," which he produced and starred in. He is touring countries to promote the film. 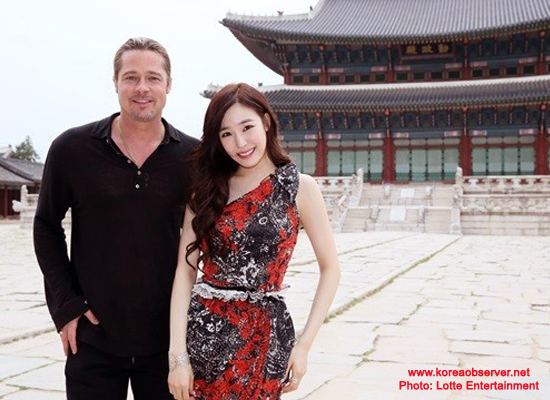 Before attending the red carpet event for the movie, Pitt was interviewed by Girls' Generation's Tiffany for SBS "One Night of TV Entertainment." Tiffany, who was born in the US, is fluent in English and Korean.

The interview, which aired in Korea on June 12, was held at the famous Gyeongbok Palace in Seoul. Before the interview proper, Tiffany presented Pitt with a pair of wooden ducks, which symbolizes harmony in a relationship between husband and wife.

"You should take it home and open it together [with Angelina Jolie]," Tiffany told Pitt.

Tiffany asked Pitt if he expected that there were so many fans who came to see him during the first time he was in Korea.

"No. I had no idea what to expect. We got such a warm welcome and you feel such goodwill. It's nice and makes you wanna come back," he said.

Pitt said he was happy visiting Korea and he was impressed by the food especially Korean barbecue and architecture.

"It's a real pleasure. Last time I was mainly about the [Korean] barbecue. I was so impressed. I'll bring my son back. The food is fantastic [and] the architecture as well. Unfortunately when we're on these tours, you only get to go in and out. You don't really get inside [and explore]," he said.

Pitt visited Korea for the first time in 2011 to promote his movie "Moneyball."
It's been 25 years since Pitt ventured into acting. Tiffany asked him, "What's the greatest change that has happened [to you]?"

"I became a dad. I have six kids now," he said, referring to Pax, Maddox, Zahara, Shiloh, Knox, and Vivienne.

Besides starring in "World War Z," Pitt is also one of the film's producers. The movie is based on the novel of the same title by Max Brooks. It stars Pitt, Mireille Enos, James Badge Dale and Matthew Fox.

Asked by Tiffany how does he "feel to be able to take control of the whole production and be a part of it at the same time," Pitt said he's thrilled.

"It's just more responsibility but, you know, I'm really, really thrilled with the film," he said.

He added that the reason that he took the film was because of his boys.
"My boys, my boys love these kind of films. That's where it got started then I got really carried away from there," he said.

"It's great to be here. It's so nice. I'm just looking forward for people to see it. It's so much fun," he said.

Tiffany was also able to urge Pitt to say hi to Sooyoung, another Girls' Generation member who is a fan of the actor.

At the end of the interview, Tiffany taught Pitt the Korean word "daebak," which means big success or awesome.


Link to my original article on Manila Bulletin online:
http://mb.com.ph/Entertainment/Entertainment_Main/16969/Brad_Pitt_interviewed_by_Girls#.UcGSrvlmiSp

Email me at sangchusan(at)gmail.com
at 10:59 AM