By JONATHAN HICAP, Manila Bulletin
2NE1′s “All or Nothing” world tour got off to a big start on March 1 and 2 at the SK Handball Arena in Seoul, South Korea, with an estimated 12,000 domestic and international fans in attendance. 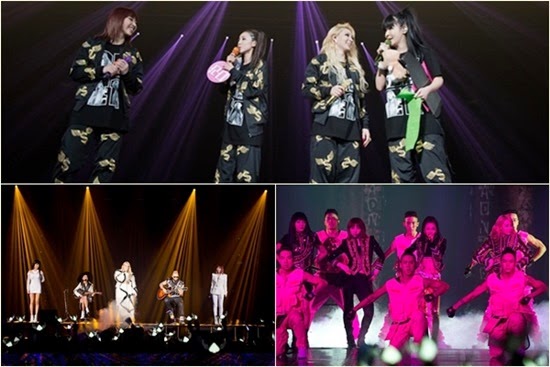 CL, Sandara Park, Bom and Minzy dazzled the throng as they performed such songs as “Fire,” “Gotta Be You,” “Come Back Home,” “I Don’t Care,” “Clap Your Hands,” “Pretty Boy,” “Don’t Stop the Music” “Go Away” and “Scream,” among others.
2NE1 also performed the acoustic version of “Come Back Home,” with Sandara on guitar.
The concert, which also featured Winner, YG Entertainment’s newest boy band, ran for about two hours.
The tour will proceed to 12 cities in nine countries including stops in Taiwan, Thailand, Philippines, Japan, Malaysia and Singapore.
Their music video for “Happy” was also premiered at the concert.
Meanwhile,YG Entertainment announced that the music videos for “Come Back Home” will also be finally released today.
Last March 1, the agency apologized for the delay in the release of the music video because of a “crew’s computer graphic work for the latter part of the clip.”
2NE1 released “Crush” last Feb. 27. It went on to top several South Korean charts.
The album also ranked No. 1 on iTunes Brunei, Finland, Indonesia, Malaysia, Thailand, Vietnam, and Hong Kong, according to YG Entertainment.
2NE1 will be performing on SBS’ “Inkigayo” March 9, to promote “Crush.”
Link to my original article on Manila Bulletin online:
http://www.mb.com.ph/2ne1s-world-tour-kicks-off-in-seoul/

To contact the author, send email to sangchusan(at)gmail.com
at 2:13 PM