EXCLUSIVE: JYJ gearing up for new album, concerts this year

By JONATHAN HICAP, Manila Bulletin
Popular K-pop boy band JYJ will be quite busy this year with a ramped up list of activities they have lined up.
“Finally, we will bring you a new JYJ album in the second half of this year and, of course, there will be tours for concerts,” JYJ told Bulletin Entertainment.


JYJ members Jaejoong, Yoochun and Junsu started under boy band TVXQ in 2003. After leaving the group in 2009, they formed JYJ and successfully debuted in April 2010.
Their first worldwide album “The Beginning,” released that same year, grabbed attention with the participation of Kanye West and Rodney Jerkins. The album reached 450,000 in pre-orders in Korea.
The band held showcase tours in Seoul, New York and Hong Kong, with their first concert in Korea in November 2010 attended by 70,000 fans.
Game on
This year, JYJ was appointed honorary ambassador to help promote the 17th Asian Games to be held in Incheon, South Korea in September.
“The Asian Games is the biggest festival of 4.5 billion people across Asia. It is such an honor and pleasure for us to be appointed as the honorary ambassador. We sing the theme song of the Asian Games, ‘Only One,’ and we have been promoting the Incheon Asian Games by showcasing our dances and songs across Asia,” JYJ said.
“The Incheon Asian Games is about putting together sports and fun. As such, this song delivers the message of hope, passion and fun. We are rooting for all those players who have been working out days and nights, so that they can reap good results. They deserve to enjoy the Games… It also tells the audiences to cheer for the players with such passion. Simply put, it is a bright and cheerful song,” they explained. 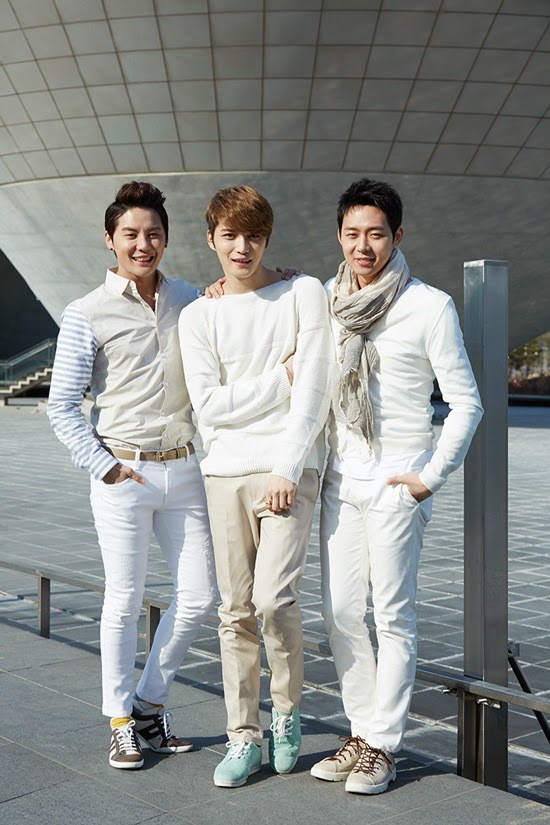 Along with doing road shows all over Asia to promote the Games, JYJ was originally scheduled to visit and perform in Boracay last November for the Asian Games Centennial Festival. The event was cancelled due to the destruction by Typhoon “Yolanda.”
“We are currently looking for ways to help the victims… It was really regrettable that we could not meet our fans in the Philippines. We heard that they have been waiting for such a long time and we do appreciate (it). We hope to visit the Philippines in the near future, putting up a concert and spending quality time with our JYJ members in Boracay,” the boy band said.
A beach trip would actually be perfect for JYJ because they like to “spend time together riding a jet ski, swimming or watching fish in the sea, (because) it feels like all fatigue and stresses are simply disappearing.”
No more legal tangles
Last month, JYJ and their former Japanese label AVEX have reached an agreement to end their legal battle and not interfere with each other’s activities.
With that resolved, they said, “We strongly hope to release an album in Japanese and do a concert. We know they have waited for so long and we appreciate to them as much.”
JYJ members have also not performed or even appeared on any Korean TV music programs, something their fans now eagerly await.
“We always hope to stand on the same stage (at) par with other singers. Even if that is not going to be easy, we will still be able to show our performances through music videos or concert recordings as part of JYJ album showcases in the second half of this year,” JYJ said.
A bit of down time
The very busy JYJ members like to go on trips during their free time. Their activities are scheduled “through mutual discussions,” they say.
“Junsu goes on a trip with staff members whenever he finishes musicals or solo album activities. Jaejoong and Yucheon try to have their own time out of busy schedules for things like sports, travel or driving,” they shared.
Because they do get along well, spending time together actually helps them beat the stress from work.
“We are usually tied up with individual schedules but sometimes we come together for advertisement filming or honorary ambassador activities. When we get together like this, it is just so much fun and we play tricks (on) each other and laugh our hearts out. In a sense, we are like vitamin to one another,” JYJ said.
As a message to their “dear fans” in the Philippines, they said, “We do appreciate you for your invariable support and throwing birthday parties for us every year. We know how much love you have given us and hopefully we will come to meet you as soon as possible! We hope you will be happy every day in your life and wish you the very best of all in 2014.”
Link to my original article on Manila Bulletin online:
http://www.mb.com.ph/exclusive-jyj-gearing-up-for-new-album-concerts-this-year/

To contact the author, send email to sangchusan(at)gmail.com
at 3:16 PM