The ladies of 4minute are off to a great start after the lunar new year holidays, as they've been awarded the "KPop New Artist Award" at the 2010 Billboard Japan Music Awards on February 6th. 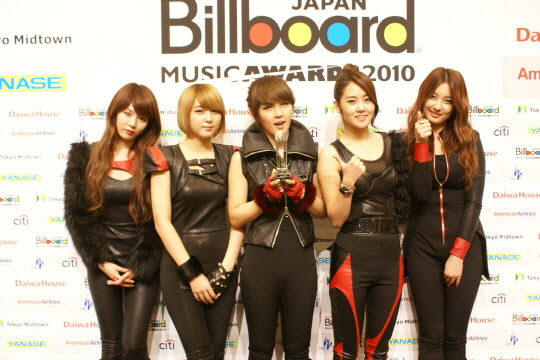 
According to CUBE Entertainment on the 7th, after having debuted in Japan last year, 4minute was chosen as the winner for standing out among other kpop acts and attracting much attention for any future releases.

For their thank you speech, the ladies expressed that they'd work harder to not only conquer Korea, Japan, and Asia, but the entire world. They even performed two songs -- "First" and "Muzik" -- at the ceremony.

Many stars were in attendance, including Japanese group AKB48 and US artist Nick Carter from the Backstreet Boys.

4minute is currently in the process of recording their next album release in Korea. They will also be releasing a new single, "Why", in Japan for next month. (KBS)
at 1:53 AM