MANILA, Philippines (Feb. 14, 2011) — If Koreans were given a choice to pick celebrities they want to be their dates on Valentine’s Day, they would spend the red-letter day with Girls Generation (aka SNSD), Big Bang, actor Hyun Bin and actress Kim Tae Hee. 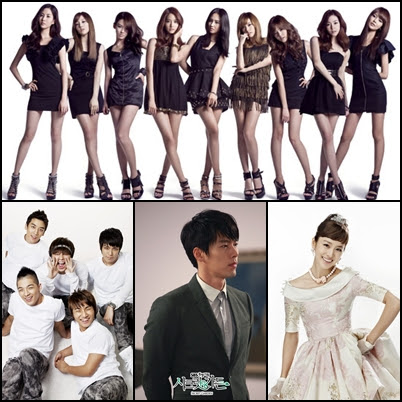 Two polls were conducted to know which celebrities are the favorites by Koreans for Valentine’s Day.

Girls Generation garnered 41 percent of the votes to emerge as No. 1 followed by singer IU with 31 percent.

Big Bang topped in the male idol category with 27 percent of the votes followed by 2PM with 18 percent, BEAST with 16 percent and 2AM with 15 percent.

Actor Hyun Bin, who currently stars in the series “Secret Garden,” was picked by females as the male celebrity they want to give chocolates on Valentine’s Day.

In another poll conducted among 500 Koreans by website www.couple.net, actor Hyun Bin also emerged as the winner.

He was chosen by 26.4 percent, or 66, of the 250 females surveyed as their ideal date for Valentine’s Day, according to the Korea Times.

In the male category, Hyun Bin was followed by actor and singer Lee Seung-ki with 8 percent, actors Song Seung-hun and Won Bin with 7.2 percent and So Ji-sub with 6.4 percent.