You see it on Korean dramas and films. In the hit Korean drama series "Jewel in the Palace", the hanbok, Korea's traditional dress, gained prominence as it was a period drama.

Hanbok is South Korea's traditional dress that is worn in many occasions especially when Koreans celebrate Chuesok, or harvest festival, and Seollal, or Lunar New Year. 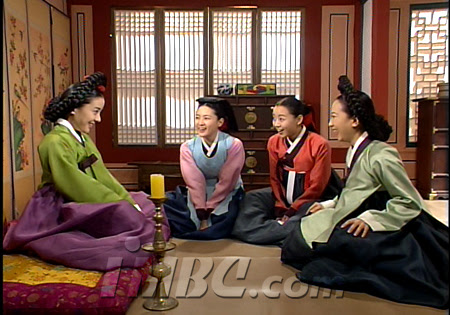 The hanbok dates back to the dynasty period in South Korea. According to South Korea's Ministry of Culture, Sports and Tourism:

Hanbok means literally “Korean dress,” the traditional clothing that Koreans have worn through the ages. Hanbok is also the national dress that Koreans often use to express their sense of identity. Thus, the hanbok is the “face” of the Korean people, embodying their characteristics and aesthetics.

The oldest form of hanbok can be seen in tomb mural paintings from the Goguryeo Kingdom (37 B.C.-668 A.D.). In these murals, both men and women wear an upper garment of the jeogori or “jacket” type over trousers or a skirt, though the cut of the costume differs noticeably according to social status or occupation. The basic feature of the hanbok from this period is that the male and female versions are similar, each comprising an upper and a lower garment.

In general, men wore a jacket and pants, women a jacket and skirt, while on formal occasions, both might wear a topcoat or gown over this outfit. The upper and lower garments were of different colors. An especially distinctive feature was the use of a wide band, darker than the main color, along the collar, front hem, and bottom hem of the upper garment. The same darker color might also be used for a belt that emphasized the shape of the upper garment and gave the wearer a geometrical look by dividing the body spatially.

There were many variations on this use of decorative lines, and sometimes a second, thinner line was added. From this we can infer that line decoration was used as an aesthetic element designed to make the upper garment stand out as a focus of attention. It may also have served a practical purpose in making the edges of the garment stronger and more resistant to soiling.

The fabric of the costume is depicted as decorated with dots in various designs, and these have been interpreted as simplifications of the decorative designs that were actually used on clothing of the period. Clothing in the contemporary kingdoms of Baekje (18 B.C.-660 A.D.) and Silla (57 B.C-668 A.D.) is believed to have been similar to that of Goguryeo Kingdom in basic shape, with some differences in size and fit, coloring, and headdress. In state ceremonies, the king, queen and officials wore the Chinese-influenced formal dress, but under this they wore traditional Korean clothing. The ceremonial dress of the king, and even the hat and shoes worn with it, varied with the nature of the ceremony. The status of other wearers was reflected in the design and coloring of their clothes. Dragon designs were restricted to the royal family: the five-clawed dragon could only be worn by the king and queen, the four-clawed dragon by the crown prince, and the three-clawed dragon by the crown prince's eldest son.

Officials, similarly, were differentiated by the designs embroidered on the front and back of their gowns: civil officials sported a crane, military officials a tiger, and the larger the number of cranes or tigers, the higher the rank of the wearer. Status was also symbolized by color. Yellow stood for the emperor, red for the king, and purple for the crown prince, while violet, blue, and green were used to distinguish the rank of officials.

The women's hanbok consists of a jacket and skirt, the men's of a jacket and pants, both with an optional gown for added formality. The jackets of men and women are similar in shape, but differ in length and color scheme.

The men's jacket is made rather long with sleeves attached, and to prevent the front from coming open, the two sides overlap. The neck is gathered up into a collar with a white collar strip folded over it for a neat appearance. Breast-ties hold the two sides of the jacket together where one side is folded over the other. Until the mid Joseon period, the breast-ties were short and thin and served merely to fasten the two sides of the jacket, but in the late Joseon era, they became longer and thicker, showing that they had taken on a decorative aspect quite apart from their practical function. The male costume could include a gown similar to a topcoat worn over the jacket and pants, with various kinds of hat and coronet worn on the head for a truly dignified effect. The type of gown worn would depend on the occasion. Although the generous cut of the men's clothes accentuated the individuality of the wearer, the use of a belt framed the upper body for a tidy appearance.

The typical male costume of that period is the gentleman's outfit of white or jade green gown and black headwear. The harmony of black and white suggests a calm and rational intellect and a noble character. A multicolored girdle worn about the chest adds vibrancy to the contrast of black and white, which could otherwise look stern and forbidding.

The women's costume consists of a jacket and skirt with a sleeveless waistcoat and a gown worn when formality demands. Ceremonial clothes can be adorned with various ornaments including coronets, bridal headpieces, hairpins, and pendants.The upper garment fits neatly while the lower garment is more voluminous, and under it can be worn diverse kinds of underwear.

The women of that time attached great importance to chastity, and when they went out they covered their faces with a shawl or cloak to cut themselves off from the outside world. In their clothing and ornaments they used a variety of colors and designs, often symbolizing the cherished hopes of the age: long life and happiness, prosperity and posterity, loyalty and filial piety.

After Silla unified the peninsula in the 7th century, a new style of clothing appeared which combined indigenous Korean dress with elements imported from China. This Chinese style of the Tang Dynasty (618-907 A.D.) became an international clothing style and was used for the uniforms of officials and for ceremonial dress. The most striking difference is that while the indigenous Korean style has a straight neckline, the imported style has a rounded one.

In the ensuing Goryeo (918-1392) and Joseon (1392-1910) periods, the hanbok went through various changes of fashion, and the form that has become standard today dates from Joseon. Koreans began to reflect seriously on their national identity in the Sirhak or “Practical Learning” movement of the 17th and 18th centuries, and in clothing as in other fields, whatever was imported was subsequently Koreanized.

In the Joseon period, clothing was largely standardized, and most Koreans came to dress similarly. Even so, differences in social status were reflected in subtle distinctions of design, material, and decoration, so that contemporary Koreans could indirectly discern the class, rank, educational level, and character of the wearer by his style of dress. Although the basic shape was relatively uniform, we can also identify the season depicted in paintings from this period by the type of material worn and the use of seasonal clothing.