Girls Generation makes debut on US TV (with vids) 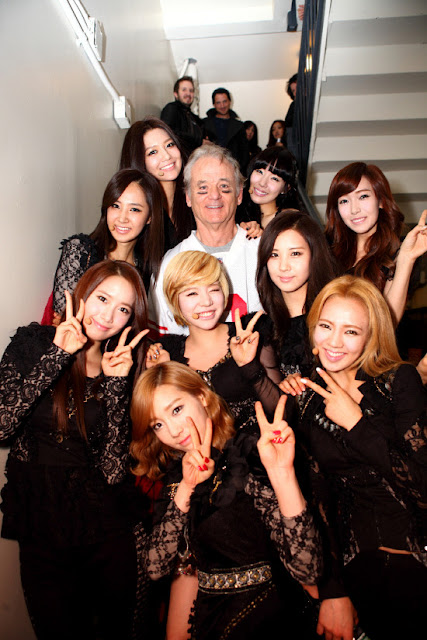 The girls performed their English song “The Boys” on “Late Show with David Letterman” on Jan. 31 and “Live with Kelly” on Feb. 1.
At the David Letterman show, fans and media waited for the arrival of Girls Generation. Before entering the Ed Sullivan Theater, where the show is recorded, Girls Generation members met with fans and signed autographs.
During the Jan. 31 show, the guests were Bill Murray, Regis Philbin and Girls Generation.
Before their spot, Letterman introduced the girls: "Our next guests are a very popular group from South Korea who have just released their first album in America, it’s entitled ‘The Boys.’ Please welcome, making their network television debut, Girls Generation.”
After Girls Generation performed, Letterman told them “Kamsahamnida” or “Thank you” in Korean.
At the “Live! with Kelly,” the girls also performed “The Boys.” Fans waited outside the studio to see the pop group.
Co-host Howie Mandel took notice of the fans inside and outside the studio.
Ripa quipped “That’s incredible” while Mandel said, “Isn’t that amazing?”
During the interview portion, Mandel said, “I love your dancing. Your moves were tremendous.”
After the show, Ripa posted a photo of herself with Girls Generation on Twitter with the caption “GG! [Girls Generation] With the newest GG member? Lol.”
Ripa on her personal Twitter account posted, “Yes I am! Love @GirlsGeneration love!!!” to answer a fan’s post that she was becoming a fan of the girls.
Original article: http://www.mb.com.ph/articles/350072/girls-generation-makes-debut-us-tv
at 1:53 PM