Sandara Park posts a mysterious photo taken in the Philippines

MANILA, Philippines – Was it a ghost?
Korean girl group 2NE1 spent five days in the Philippines last week for a vacation and photo shoot. Throughout their stay, Sandara Park kept 2NE1 fans updated by posting photos of their activities in Manila and Albay. 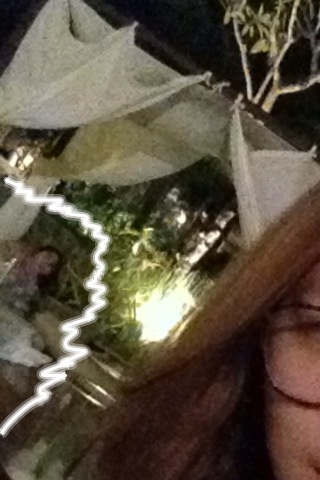 2NE1 is back in Korea and on her latest update on her me2day account, Sandara Park uploaded a mysterious and creepy photo taken by one of 2NE1’s staff in Albay on Feb. 9.
The photo is a selca (or “self camera” or “self capture,” a term coined by Koreans to mean taking photo of one’s self) of the staff.
In the photo, an image of an unidentified woman with long hair appears in the background.
In a translation by oh-dara.com and @WeLoveDara on Twitter, Sandara Park wrote, “At the resort during our last night… I had our dinner table set by the pool, and then invited the members and staff to eat. It was just us then.. We were eating food, talking to each other, and taking pictures, we  were resting leisurely when all of the sudden, there was a light shower and we all ran off to our rooms in a hurry. This photo is a selca taken by one of our staff, however..!”
She then uploaded a cropped version of the photo.
She added, “Now! Let us zoom in on that photo and take a look! We can clearly see that it’s a form of a long-haired woman, wearing a one-piece dress.. But at that time, at that place, there was really no one else there. Although it looks like a person, but I really don’t think it’s a person. Really.. What is the real identity..? I’ll just leave this for everyone’s imagination.. There are things in this world that people aren’t able to explain though.”
The photos drew more than 2,000 comments on her me2day account.
Sandara Park, CL, Park Bom and Minzy arrived in the Philippines last Feb. 1 and left on Feb. 5.
“Maraming salamat sa inyong lahat. Mahal ko kayo (Thank you very much everone. I love you all),” Sandara Park wrote on Feb. 6 to thank all their fans in the Philippines.
http://www.mb.com.ph/articles/351110/sandara-park-posts-a-mysterious-photo-taken-philippines