The Korean Cultural Center and the Association of Korean Folk Painting Artists will be opening the exhibit Minhwa: The Meaning of Symbols in Folk Painting on March 8, featuring eight Korean artists whose works highlight the importance of minhwa or folk painting in the Korean socio-historical landscape. 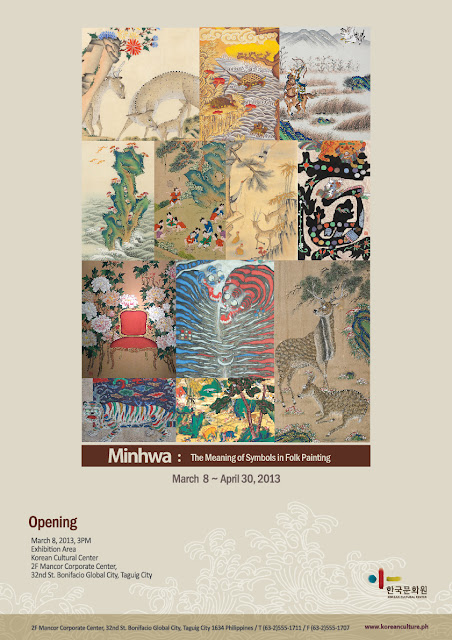 Minhwa or folk paintings became popular between 17th to 19th centuries and are generally characterized as works by wandering or anonymous artists without any formal training in that particular field of art. These were created due to the desire and the need of the commoners for pictures they could identify their lifestyles with at the time when the Korean society was segregated into classes.

In the same light, the economic prosperity in the latter half of the Joseon Period has led to the exponential increase of demand for folk paintings. Luxury was not simply limited to the elite and the commoners eventually followed suit. Such social situation had given rise to the popularity of minhwa, which suited the tastes of the commoners as professional works of art required a higher form of art education and learning, in general.

The folk paintings reflect the lives, dreams and belief of commoners in a much more honest form of expression as compared to the professional works of art constrained by formalities. Minhwa can be divided into categories depending on its use. There are paintings for decorations, for special events, and paintings to ward off evil spirits.

The exhibit runs until April 30.

Email me at sangchusan(at)gmail.com
at 4:05 PM