By JONATHAN HICAP, Manila Bulletin
Korean pop singer Baek Ji Young is reportedly pregnant with her first baby, just a month after she announced that she would be getting married to her boyfriend.
"I heard that Ms. Baek Ji Young is pregnant. She is being very careful because she's in the beginnings of her pregnancy," ENewsWorld quoted a source as saying. 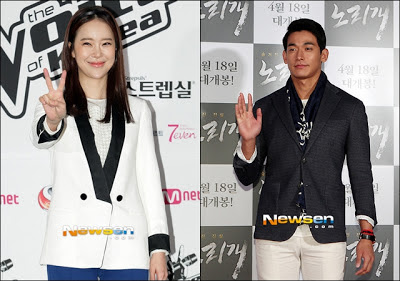 The singer is said to be two months pregnant.
Last month, Baek Ji Young, 37, and her boyfriend, actor Jung Seok Won, 28, announced their wedding scheduled on June 2.
The two have been together for two years since 2011.
It was not known if the announcement of the wedding was due to her reported pregnancy.
Jung Seok Won surprised Baek Ji Young at her concert last May 11 when he proposed to her onstage.
“I came here in surprise without letting Baek Ji Young know. I really wanted to propose to her, but we were both busy that it was always words and not action. So today I asked my movie director to free up some time for me and now I’m here. Will you marry me?” said Jung Seok Won, according to ENewsWorld.
An emotional Baek Ji Young answered, "Of course."
Baek Ji Young debuted in the K-pop scene in 1999. She is currently a coach in "The Voice of Korea 2." Last March, she released her "Flashback" album.
Jung Seok Won appeared in Korean dramas such as "IRIS II," Haeundae Lovers," Rooftop Prince," Ojakgyo Brothers," "Midas" and "Dr. Champ."

Link to my original article on Manila Bulletin online:
http://www.mb.com.ph/article.php?aid=11920&sid=4&subid=26#.UaDcJEBmiSo

Email me at sangchusan(at)gmail.com
at 11:45 PM