By JONATHAN HICAP, Manila Bulletin
T-ara N4, the new sub-unit of girl group T-ara, will be venturing into the US market through a collaboration with Chris Brown, Snoop Dogg and other rappers. The girl group, composed of Hyomin, Eunjung, Jiyeon and Areum, recently went to the US to meet with Brown.

On May 20, T-ara N4 held a press conference in Seoul and talked about their plans. 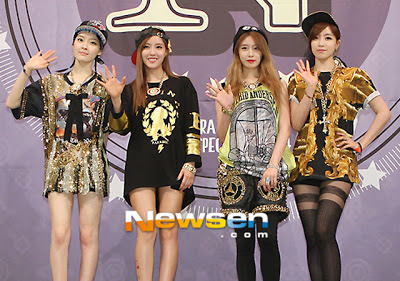 “The new version of ‘Countryside Diaries’ will draw participation from Snoop Dogg, T-Pain, Ray J and Chris Brown. Five different versions of the song will be released in America and around the world at the same time,” said Hyomin, according to ENewsWorld.

The group added that the songs would be released in June.

In addition, T-ara N4 will be flying back to the US on May 25 to perform as the opening act for Brown’s concert.

The group will also walk the red carpet with Brown at the BET Awards slated on June 30. Brown is nominated for Best Male R&B/Pop Artist and will also perform at the awards ceremony.

T-ara N4 and Brown’s meeting was made possible through Dani, a T-ara trainee. Dani and Brown are friends.

T-ara also revealed another sub-unit called QBS, composed of Qri, Boram and Soyeon, which will concentrate on the Japanese market. QBS will release its first Japanese single in June.

It has been a tough year for T-ara since the departure of member Hwayoung last year. Netizens accused T-ara of bullying Hwayoung that led to her departure from the group.

“The members had fought. We usually make up after fighting, but we were wrong to bring it out before the public,” ENewsWorld quoted Eunjung as saying.
T-ara was severely criticized because of the bullying controversy.


Link to my original article on Manila Bulletin online:
http://www.mb.com.ph/article.php?aid=13002&sid=4&subid=26#.UaFocUBmiSo

Email me at sangchusan(at)gmail.com
at 9:44 AM

Email ThisBlogThis!Share to TwitterShare to FacebookShare to Pinterest
Labels: T-ara