By JONATHAN HICAP, Manila Bulletin
Legendary singer Seo Taiji is getting married for the second time to another actress.
It was announced that 41-year-old Seo Taiji, a pioneer in popularizing K-pop in the 1990s, will be tying the knot with 25-year-old actress Lee Eun Sung, who is 16 years younger than him. 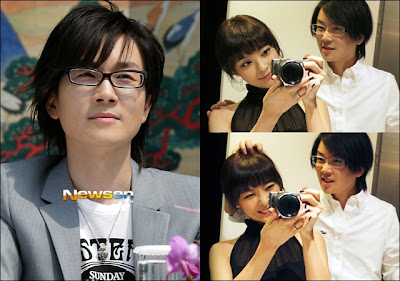 Seo and Lee reportedly met when the former was recording the music video for his song "Bermuda Triangle" in 2008 and they started dating in 2009, according to ENewsWorld.

“I have found the other half that I’ve been waiting for for a long time. So I plan on marrying my other half. I bet you are surprised. The person who will be my wife is actress Lee Eun Sung. Eun Sung is a good person who makes me and everyone smile warmly,” Seo posted the announcement on his official website, ENewsWorld said.
The announcement came two years after Seo was involved in the much publicized alimony lawsuit filed by his former wife, actress Lee Ji Ah.
In 2011, Lee Ji Ah sued Seo Taiji for 500 million won (about P20 million then) for alimony and wants 5 billion won (200 million) of his total assets.
With the lawsuit, Korean fans were shocked to find out that Seo and Lee Ji Ah were even married.
Seo Taiji and Lee Ji Ah got married in the US on Oct. 12, 1997 in Clark County, Nevada, and for 14 years, they kept it a secret until the lawsuit became public. Lee Ji Ah filed for divorce in 2006.
It also sparked another controversy as it was reported that Lee Ji Ah's boyfriend at the time, actor Jung Woo-sung, did not know about her marriage to Seo Taiji. The two broke up after.
A month after, Lee Ji Ah withdrew the alimony lawsuit against Seo Taiji and in July 2011, the two reached an amicable settlement.
Seo Taiji popularized the K-pop genre in the 1990s through his band Seo Taiji and Boys.
He is one of the richest celebrities in Korea. In a report by the Korea Times last year, it listed Seo Taiji as owner of buildings with the highest property values.
The report, quoting website Chaebul.com, said Seo Taiji owns a nine-story building in Gangnam, Seoul worth 9.27 billion (about P342 million) and a property in Jongno worth 16.62 billion won (about P614 million), or a total of 25.89 billion won (P956 million).
Lee Eun Sung's last project was the film "Take Off" in 2009. She appeared in dramas "Sharp 1," Que Sera Sera" and "I Am Happy."

Link to my original article on Manila Bulletin online:
http://mb.com.ph/article.php?aid=12234&sid=4&subid=26#.UaDj6kBmiSo

Email me at sangchusan(at)gmail.com
at 12:18 AM