By JONATHAN HICAP, Manila Bulletin
Korean rapper Psy attended the Metropolitan Museum of Art's annual gala in New York City on May 6 (May 7 in Manila) that drew Hollywood celebrities including Anne Hathaway, Kristen Stewart, Taylor Swift, Emma Watson and Kanye West.
At the event, Psy met and had a picture taken with Beyonce and Gwyneth Paltrow. 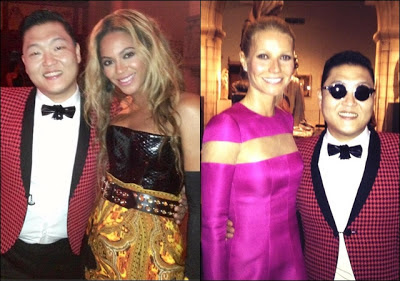 "Finally talked to @Beyonce about 'single ladies' at #MetGala," he tweeted together with the photo.
Psy perhaps was referring to his "Single Ladies" performance at his "Happening" concert in Seoul last April 14 where he launched his global hit "Gentleman." During the performance, Psy wore a red leotard.
This year's Met Gala event was held under the theme "PUNK: Chaos to Couture" and Beyonce is the honorary chairperson.
Psy also posted pictures of himself with Paltrow and her husband Chris Martin.
"Making new friends at #MetGala @GwynethPaltrow and her husband Chris Martin," the rapper tweeted.
Psy is in the US to promote his single "Gentleman."
He performed the single on "Live with Kelly and Michael" where he taught the hosts the song's "arrogant" dance steps.
He first performed "Gentleman" on "The Today Show" last week.
On May 9, Psy will speak before Harvard University students in Cambridge, Massachusetts.
Organized by Harvard University's Korea Institute, the event is called "Conversation with Psy."
"Best known for his 2012 smash hit 'Gangnam Style,' the multi-platinum single that merged Korean flavor with global pop panache, PSY has mesmerized critics and fans worldwide with his enigmatic dance moves and unforgettable presence. The first music video in history to surpass 1 billion views on YouTube, the song went on to become both the 'most-viewed' and 'most-liked' on the site. His 2013 follow-up 'Gentleman' has nearly 300 million views in three weeks and set a new YouTube record with 38 million views in a single day," according to the Harvard Gazette.
"Gentleman" is currently at No. 26 on Billboard's Hot 100 chart, down from fifth place in the previous week.
The "Gentleman" music video has accumulated 295 million views on YouTube.

Link to my original article on Manila Bulletin online:
http://beonline.com.ph/article.php?id=1782&Cid=4&PPid=

Email me at sangchusan(at)gmail.com
at 11:23 PM

Email ThisBlogThis!Share to TwitterShare to FacebookShare to Pinterest
Labels: Psy