2NE1, other K-pop groups to debut in Japanese music market 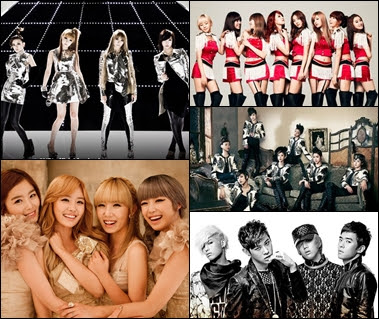 On her me2day account, Sandara Park revealed 2NE1’s new Japanese website,www.2ne10921.com. It is believed that based on the website URL, 2NE1 will debut in Japan on Sept. 21.
2NE1 were supposed to debut in Japan last March with their first Japanese single “Go Away” but this was cancelled after a powerful earthquake and tsunami hit Japan on March 11.
In the aftermath of the disaster, YG Entertainment decided to push back the group’s Japan debut.
Girl group After School will also debut in Japan with the release of their first Japanese single “Bang” on Aug. 17.
Before this, After School will perform on July 17 at the Akasaka Blitz in Tokyo. The girl group will also perform on the popular yearly concert “a-nation” in Japan on Aug. 13, 21 and 27.
After School is composed of Kahi, UEE, Jung-ah, Lizzy, Jooyeon, Raina, Nana, and E-Young.
In addition, seven-member T-ARA will also make their debut in Japan in September with the Japanese version of their hit Korean song “Bo Peep Bo Peep."
Last July 5, T-ARA held a showcase before about 1,500 fans at the Shibuya-Ax in Tokyo.
T-ARA recently made their comeback to the K-pop scene with the release of their new song “Roly Poly." The group is composed of Hyomin, Boram, Qri, Soyeon, Jiyeon, Eunjung, and Hwayoung.
Like the other groups, four-member girl band Secret will also debut in Japan. The group will release their first Japanese single “Madonna” on Aug. 3.
Secret—composed of Sunhwa, Jieun, Zinger and Hyosung—debuted in Korea in 2009. The group won a bonsang at this year’s Seoul Music Awards.
Boy band F.Cuz will also release their Japanese debut single “Never Let You Go” on Aug. 17.
Original article: http://www.mb.com.ph/articles/325783/2ne1-other-kpop-groups-debut-japanese-music-market