MANILA, Philippines - Popular Korean star, Song Joong Ki, 27, one of the busiest and most popular actors and product endorsers in Korea today, recently visited Cebu for a working vacation. 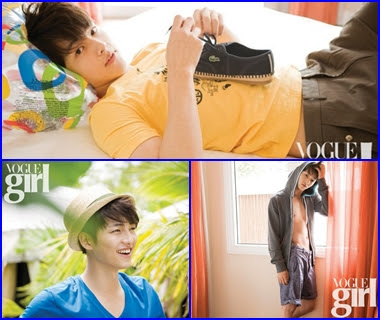 “Through this travel, I got to rest and relax before the upcoming hectic schedule,” he said.
Song's visit coincided with a photo shoot for “Vogue Girl” Korea, held at the Imperial Palace Waterpark Resort & Spa in Maribago, Lapu -Lapu City.
The Cebu photos, which is set to appear in the August issue of the magazine, allowed Joong Ki to bare some skin. It is also the first time he showed his abs.
Joong Ki shot to fame when he starred in the Korean drama “Sungkyunkwan Scandal” together with Micky Yoochun of JYJ, actress Park Min Young and actor Yoo Ah In, last year. It won for him the popularity award in the 2010 KBS Drama Awards.
It also opened the doors for Joong Ki to bag a number of product endorsements and star in various commercials.
Joong Ki was named one of the top seven commercial endorsers in Korea by a Korean online news site.
From June 2010 to May this year, Joong Ki had eight commercials including one for a camera and a cosmetics brand.
Joong Ki made his acting debut in 2008, appearing in the movie “Frozen Flower.” He subsequently appeared in such dramas as “Will it Snow at Christmas?,” “Obstetrics and Gynecology Doctors," “My Precious Child,” and “Love Racing.”
Among his other movies are “The Case of the Itaewon Homicide” and “Ogamdo.”
He is set to star in the movie “Penny-Pinching Romance” and in the drama “Deep-Rooted Tree.”
Link: http://www.mb.com.ph/articles/327805/korean-star-goes-cebu
at 6:53 PM