MANILA, Philippines – JYJ’s Micky Yoochun has been chosen as the best idol actor while boy band TVXQ was picked as having the most impressive performance by fellow Korean singers in a survey held recently. 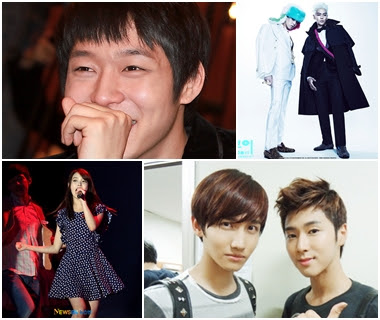 Korean news and entertainment site SportsSeoul.com held the survey among 100 Korean idol singers to choose the best singers, idol actors and best drama for the first half of the year.
Among the Korean singers who have ventured into acting, JYJ’s Micky Yoochun was the top pick, garnering 36.3 percent in the survey. Yoochun is currently starring in the drama “Miss Ripley." In second place was Super Junior’s Siwon who got 34.5 percent followed by T-ara’s Eun Jung with 27.2 percent.
For the best dramas this year, “Secret Garden” and “The Greatest Love” were chosen by 67.2 percent of the respondents. Second place was “Dream High” with 34.5 percent and “City Hunter” at third with 18 percent.
In terms of music, 35 percent of the respondents chose popular singer IU’s “Good Day” as the best song for the first half of the year, followed by BEAST’s “Fiction” and Big Bang’s “Tonight” with 12.7 percent each.
Boy band TVXQ topped in two categories. TVXQ was chosen by 21.8 percent of the respondents as having the most impressive performance followed by IU with 18 percent and Big Bang with 16 percent.
TVXQ’s Keep Your Head Down” was chosen as the top pick for the best music video with 16.3 percent followed by Big Bang’s “Tonight” in second place with12.7 percent and Sunny Hill’s Midnight Circus” in third place with 9 percent.
Among the newcomers, singers chose A Pink (38 percent), Rania (18 percent) and Dal Shabet (10 percent) as best rookies.
When it comes to singing, Sistar’s Hyorin was No. 1 with 47 percent, followed by Kim Junsu with 38 percent and IU with 34.5 percent.
For the most addictive song, the singers chose GD&TOP’s “High High” as No. 1, garnering 14.5 percent. Dal Shabet and Girls Day followed with 12.7 percent and 10 percent, respectively.
When it came to choreography, the respondents chose BEAST (18 percent), Dal Shabet (12 percent) and Girls Generation (10.9 percent).
Idol singers which participated in the survey were CNBlue, 2PM, f(x), Infinite, Girls Day, Nine Muses, Dal Shabet, Rania, Rainbow, miss A, Jewelry, G.NA, T-ara, 4Minute, ZE:A and Sunny Hill.
Original article: http://www.mb.com.ph/articles/325336/stars-pick-yoochun-tvxq-best-korean-idols-survey
at 2:06 PM