By JONATHAN M. HICAP
Manila Bulletin
MANILA, Philippines - Young Korean actor Yoo Seung Ho suffered severe facial fractures after his car slipped and crashed on a highway in Andong in Gyeongsangbuk province in Korea on July 29. The accident occurred as the actor was on his way to the filming of his drama “Warrior Baek Dong Soo.” 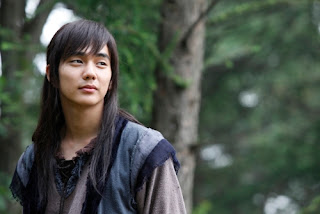 The torrential rains that pounded Korea in the last few days caused severe flooding and have made roads slippery. Officials said at least 59 people have died.
Yoo,17, sustained fractures in the cheekbone area and was rushed to the emergency room of the Seoul Samsung Hospital. He underwent x-ray and CT scan to determine his injuries.
The accident was so severe that it left the van in a state of beyond repair.
With Yoo’s injury, the filming for the day was canceled. Yoo plays a main character in the drama and his injury will affect the filming.
“Warrior Baek Dong Soo” started airing last July 4 on SBS TV station. The period drama is one of the top five programs in Korea.
The last four episodes that aired on July 18-19 and July 25-26 were No. 3 in the ratings, according to TNmS Media Korea.
Yoo is currently one of the most popular young stars in Korea. Last year, he appeared in the dramas “Flames of Ambition” and “God of Study." He was also in “Queen Seon Duk” and “The Legend."
He won the best new actor award in 2009 for his role in “Queen Seon Duk."
Link: http://www.mb.com.ph/articles/328858/actor-suffers-facial-fracture-accident-filming-show-halted