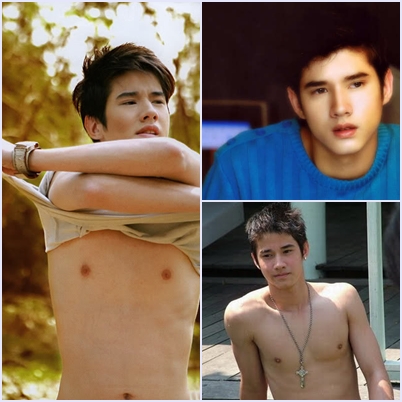 Mario has been selected as the newest endorser of clothing brand Penshoppe.
Here's a news story on this from the Manila Bulletin:

MANILA, Philippines – In a report published by PEP on July 7, it seems Thai actor-model Mario Maurer would be featured in his first-ever Philippine endorsement.
The same report also affirmed that he was signed by PR Asia, the same agency that brought “Gossip Girl” star Ed Westwick to the country for a photo shoot last month for Penshoppe's latest campaign.
It likewise noted that Joyce Ramirez, PR Asia's director for international publicity, said Maurer will be endorsing the same brand.
Maurer debuted as an actor in the romantic film “The Love of Siam” in 2007. This year, his movie "Crazy Little Thing Called Love" (original title, "First Love") was shown on ABS-CBN.
The news of Maurer's reported Philippine endorsement broke out yesterday, sending  the Twitterverse abuzz. It even landed fourth on the Philippines' Top Trending Topics on Twitter.
Giddy tweets from fans immediately surfaced after the news broke.
@xoxo_tracy wrote: "RT @yoomidear: Omg @ohohmario Mario Maurer is new Penshoppe endorser ☺ - fangirl mode activated! :)”
@kyraamelia also posted, "Mario maurer will be visiting the philippines for a penshoppe shoot. Ed westwick then mario maurer! Who's next? :)”
“@jtventurero echoed, "How can I sleep tonight knowing @ohohmario aka Mario Maurer is going to the Philippines as the latest Penshoppe endorser?!?”
"Before its Ed Westwick. Now, it’s MARIO MAURER! Penshoppe really have lots of funds! ♥” tweeted @PatDayanghirang.
Regardless of numerous assumptions, as of this writing, no official news has been released as to whether Maurer is visiting the country like Westwick.
Bulletin Entertainment tried to verify this information through PR Asia, but has yet to receive an official statement from the company.
In the early hours of July 9, meanwhile, Maurer himself posted this message via his Twitter account @ohohmario: "See you soon Philippines." This probably serves as good indication as any that there might actually be plans for him to visit the country.
And already, his fans have reacted.
@wengvann says, "see u soon mario..we are all excited to meet u..^^"
User @acuxizhil tweeted: "see you very soon mario.. i like you soooo much.."
Indeed, if Maurer does come to the country, it will be another high-profile visit for sure. (Maureen Marie Belmonte, July 9, 2011)