MANILA, Philippines - Korea is banking on the popularity of boy band Super Junior to promote the country and the Korean Wave and attract more visitors. 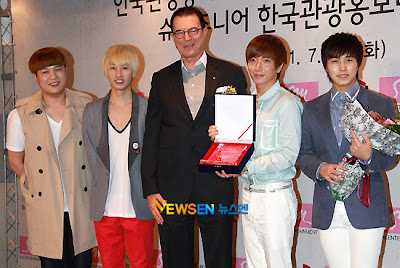 The Korea Tourism Organization (KTO) has appointed the boy band to be its tourism ambassadors.
Super Junior’s Leeteuk, Eunhyuk, Shindong and Sungmin  and SM Entertainment CEO Kim Young-Min attended the presentation ceremony on July 26 together with Lee Cham, president of the KTO.
During the ceremony, Super Junior was presented with a plaque to formalize their role as tourism ambassadors.
SM Entertainment and the KTO also signed a memorandum of understanding to collaborate on the entertainment and tourism industries’ development and promotion overseas.
The two entities will be providing information and create synergy between tourism and hallyu, or the Korean Wave.
The selection of Super Junior as tourism ambassadors was based on a survey by the KTO on 12,085 non-Korean respondents on social networking sites in May this year.
The respondents were asked to pick hallyu stars they wanted to be their travel buddies in Korea and Super Junior came on top of the survey, garnering 13 percent. Big Bang was second and JYJ was third.
By language spoken by the respondents, English speakers chose Super Junior.
Super Junior is one of the most popular idol groups not only in Korea but in other Asian countries.
Recently, Super Junior’s “Bonamana”, the title track of their fourth album, made history by ranking No. 1 for 60 consecutive weeks on the Korean music Top 100 weekly chart on KKBOX, the biggest online music website in Taiwan.
The appointment of Super Junior as Korea’s tourism ambassadors comes as the boy band prepares for their comeback to the music scene.
On August 3, Super Junior will release their fifth album and fans are agog over the teaser photos of the members that have been released in the last few days.
The boy band will come back as a group after more than a year of doing individual activities.
Link: http://mb.com.ph/articles/328449/super-junior-appointed-korea-ambassadors
at 12:23 PM