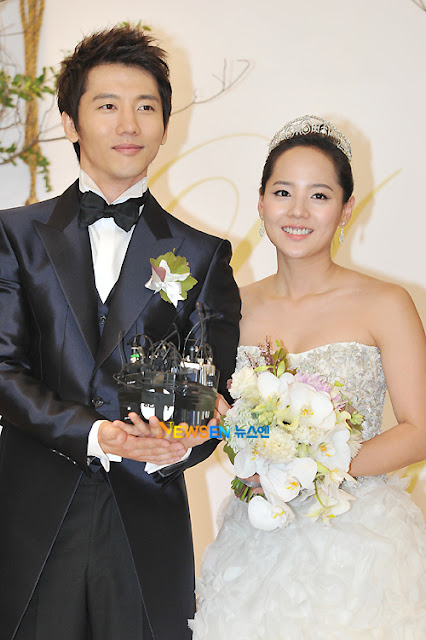 It was revealed that the actress’ stunning wedding gown was designed by no other than Monique Lhuillier, one of today’s most sought-after designers in Hollywood, whose creations have been worn by Angelina Jolie, Mandy Moore, Jennifer Lopez, Taylor Swift, Gwynet Paltrow, Catherine Zeta-Jones and Reese Witherspoon.


After the wedding ceremony, the couple met with the Korean media.
Eugene personally chose Lhuillier’s elegant tube top wedding dress over creations by other wedding designers. She also wore a tiara.
The beautiful wedding dress took months to finish, according to Korean media.
The couple’s celebrity friends attended the wedding. Big Bang member Taeyang and Zion sang “In This Moment” during the ceremony.
Among the guests seen at the wedding were singer Se7en and his girlfriend Park Han Byul, who wore a leather jacket despite that it’s summer in Korea.
Other guests defied the formality of the occasion, wearing clothes like they were going shopping.
Actress So Yu-Jin wore shorts and a sleeveless blouse to the wedding, even posting a photo of herself on her me2day account.
Other guests were actor Jung Joon Ho, Baek Ji Young, Bada, Shoo, Seo Ji Hye, Seo Ji Young, and Park Seon Young
Eugene and Tae-young met when they starred in the Korean drama “Creating Destiny” in 2009.
In May this year, the couple surprised their fans and friends when they announced that they were getting married.
Eugene was a former member of girl band SES. She then ventured into acting.  Among her Korean dramas are “Baker King, Kim Tak Gu,” “Wonderful Life,” “One Mom and Three Dads” and “Save the Last Dance for Me."
On the other hand, Ki Tae-young’s Korean dramas include “Star’s Lover,” “I’ll Teach You Love” and “Royal Family.”
Link: http://www.mb.com.ph/articles/328187/monique-lhuillier-designs-elegant-wedding-dress-korean-star-eugene
at 5:41 PM