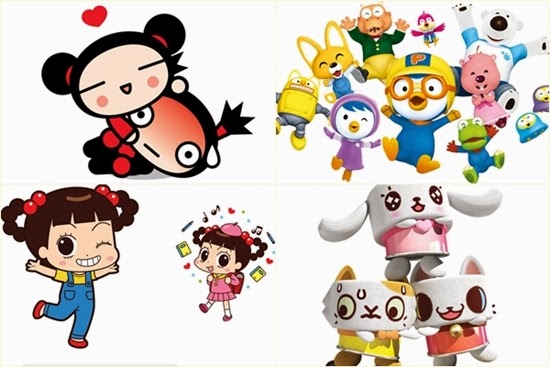 The film was co-produced by the South Korean government, which provided at least 8.5 billion won (about $7.9 billion) into the project. Also chipping in is the Korea Creative Content Agency (KOCCA), which provided about 600 million won ($556,200); the Korea Eximbank, 7 billion won ($6.5 million); and the Industrial Bank of Korea, 1 billion won ($930,000).
Co-produced by Canada’s Toonbox Entertainment, “The Nut Job,” has grossed almost $51 million in the US alone.
A whole slew of South Korean animated characters is being spotlighted in an ongoing exhibit at the Korean Cultural Center in the Philippines titled “Korean Character Exhibition: The Delight of Korean Animation Character World.”
The exhibit will feature iconic characters such as Pororo, Pucca, Tayo, Canimal, Cloud Bread and Hello Jadoo.
According to the KCC, the exhibit celebrates K-Animation even as it aims to introduce other aspects of Korean culture to local audiences.
Korean animated comics and films are part of Hallyu or the Korean Wave, which also includes K-pop, Korean dramas, language, food and technology.
“Unlike K-Pop, which relies on the popularity of its ‘idol’ stars, or K-Dramas which require a certain degree of cultural understanding, K-Animation can be directly appreciated by the world thanks to its fun and universal stories as well as cute, and lovable characters,” according to KCC Philippines.
The K-Animation exhibit is open to the public up to May 10.
Link to my original article on Manila Bulletin online:
http://www.mb.com.ph/korean-animation-exhibit-in-ph/

To contact the author, send email to sangchusan(at)gmail.com
at 11:47 PM