MANILA, Philippines - Hours before they brought the house down during their concert at the Araneta Coliseum on June 4, 2NE1 members Sandara Park, Park Bom, CL and Minzy met with the press at the Hotel InterContinental Manila and talked about their career, their Filipino fans, food and even their favorite Korean idols. 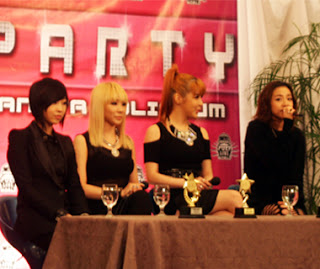 2NE1 arrived in the country last June 3 and CL, who is also fluent in English, said they were happy to see fans waiting for them at the airport.
“We felt really welcome yesterday (June 3) at the airport. We love them,” she said.
It was 2NE1’s first visit to the Philippines although Sandara has visited the country a few times for vacations. Before her rise to fame in Korea as part of 2NE1, Sandara started her showbiz career in the Philippines, acting on movies and television, and even releasing her own songs.
Sandara left her career in the Philippines and returned to South Korea to become a trainee under YG Entertainment in 2007. YG Entertainment launched 2NE1 in 2009 as the female counterpart of boy band Big Bang. Since then, 2NE1 has become one of Korea’s top artists, topping music charts and earning various awards.
CL said they are very involved in the creative process of their music.
“We’re there all the time. Even though, like Teddy (Park) makes music. We always talk with them, give them ideas. We’re always there,” she said. Teddy is YG Entertainment’s main music producer for 2NE1 and Big Bang.
Asked about their favorite male Korean idols, 2NE1 members answered carefully.
Sandara said MBLAQ is her favorite boy band. Her brother, Cheon Doong, is a member of the boy band.
Bom said her favorite is Big Bang while CL said she likes 1TYM, a hip-hop group under YG Entertainment where Teddy Park is the leader. For Minzy, she prefers Se7en, another YG Entertainment artist, whom she said is Korea’s “original idol.”
Minzy, who has been voted recently as the No. 3 best idol dancer in Korea on Mnet TV program “Idol Chart Show”, said that if given the chance, she wants a dance showdown with Taeyang, a member of Big Bang.
Many of the questions were thrown at Sandara, the most familiar member of 2NE1 for Filipinos.
Sandara said among Filipino food, she longs for sinigang, pinakbet and sisig. As she charted her career in Korea, she said she missed her Filipino fans.
“Sobrang na-miss ko sila. Medyo nervous din ako kasi baka hindi na nila ako naalala,” she said.
In her column in Manila Bulletin, comedian Giselle Sanchez quoted Christian Bautista as saying that he was afraid the 2NE1 fans might boo him during the concert. Bautista was one of the front acts.
Sandara said it wouldn’t happen as she herself is a fan of the singer.
“Nabasa ko yan. Sabi ko ‘ay ganun pala ang isip nya’. Hindi mangyayari yan. Ako mismo sobrang fan ako ni Papa Christian,” said Sandara, who even sang a line from Bautista’s song “The Way You Look at Me.”
Sandara also sang a portion of her song “In or Out”, which she released in 2004 and it became double platinum in the Philippines.
Minzy said they were excited to come to the Philippines because Sandara told them about the country and the food, adding that some of Sandara’s friends in the Philippines would send food to Korea so they were able to taste them.
Park Bom said she really wanted to go to the Philippines based on what Sandara has told her about the country’s sumptuous food and beautiful places to visit.
Minzy said she wants to go back to the Philippines and visit places.
2NE1 thanked Filipinos for the warm reception.
“Thank you so much for welcoming us. And we are so glad to be here. We always want to come back,” CL said.
Original article: http://www.mb.com.ph/articles/321475/2ne1-their-career-favorite-korean-male-singers-and-sisig
Kindle, Wi-Fi, Graphite, 6" Display with New E Ink Pearl Technology - includes Special Offers & Sponsored Screensavers