By JONATHAN M. HICAP
MANILA, Philippines – K-pop trio JYJ, composed of Xiah Junsu, Micky Yoochun and Kim Jaejoong, will push through with their concert Tuesday in Japan despite legal threats over contract with their Japanese agency Avex Entertainment. 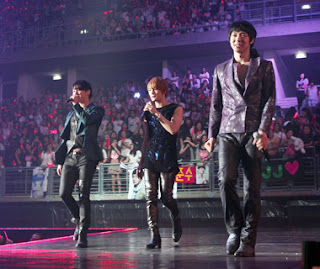 This is the first time JYJ will hold a public performance in Japan since September last year, when AVEX suspended their activities in Japan due to JYJ’s ongoing lawsuit with SM Entertainment and questions on the character of the CEO of C-JeS Entertainment, JYJ’s new Korean agency.
The concert will be held at Ryogoku Kokugikan indoor arena in Sumida, Tokyo.
JYJ are looking forward to performing at the charity concert, which will be held for the benefit of the victims of the earthquake and tsunami that hit Japan last March 11.
Avex maintains the position that the concert is being held without its permission since it is JYJ’s agency in Japan.
Last June 3, C-JeS Entertainment announced that it withdrew its lawsuit in Japan which sought for the issuance of an injunction against Avex regarding the concert.
C-JeS said the case was withdrawn since the charity concert was only a few days away.
However, it said that it would pursue its rights in the court.
In 2009, the members of JYJ sued SM Entertainment to void their exclusive contracts and then withdrew as members of boy band TVXQ.
After leaving SM Entertainment, the three signed up with Avex Entertainment to continue with their Japanese career and formed their own group, JYJ. The three also hired C-JeS Entertainment to manage their career in Korea.
However, Avex suspended JYJ’s Japanese activities last year that prevented the boy band from promoting, holding concerts and making public appearances in Japan. After dropping JYJ, Avex said it would promote the remaining two members of TVXQ in Japan.
When the charity concert was announced last April, Avex said JYJ could not proceed with the concert since the three are still under contract with the agency. JYJ then filed a case against Avex to ask a Tokyo court to issue an injunction to prevent Avex from stopping the concert.
In its June 3 statement, C-JeS said Avex used its influence to pressure Saitama Super Arena, the original venue of the concert, to reject the holding of the JYJ concert.
C-JeS Entertainment said it had terminated JYJ’s contract with Avex last February for breach of contract since the Japanese agency failed to fulfill its obligations for six months because of the suspension of JYJ  activities in Japan.
Original article: http://www.mb.com.ph/articles/321635/jyj-hold-concert-japan-today-amid-legal-threats
at 10:34 PM