K-pop overtakes dramas as main purveyor of the Korean wave

JONATHAN M. HICAP
Manila Bulletin
MANILA, Philippines -- A decade ago, Korean dramas were the main driver of hallyu, or the Korean wave, with such hits “Winter Sonata,” “Jewel in the Palace,” “My Name is Kim Sam Soon” and “Coffee Prince."

But with the explosion of the internet and social networking sites such as Facebook, YouTube and Twitter in the past few years, Korean pop music, or K-pop, has overtaken Korean dramas to become the  top purveyor of the Korean wave worldwide. 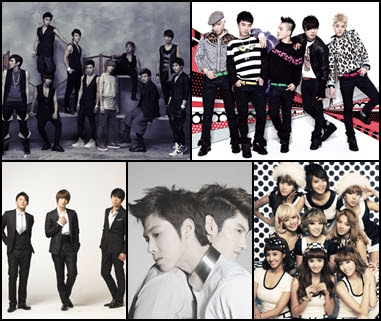 The Korea Tourism Organization (KTO) has released the results of its survey in connection with the 10th anniversary of its website.
The survey, conducted in May, had 12,085 non-Korean respondents, 90 percent of whom were women, from 102 countries through the KTO’s website, email, Twitter and Facebook, according to Korea Herald.
The respondents were asked which hallyu aspect that interested them the most. Of the total participants, 53.3 percent, or 6,441 respondents, chose K-pop.
On the other hand, 33.2 percent, or 4,012, chose Korean TV dramas while Korean films interested 6.2 percent, or 749 respondents. The remaining 7.1 percent, or 858 respondents, chose others that include Korean TV shows, Korean food and shopping.
Asians comprised 77 percent of the survey respondents while the rest came from Europe, North America, Africa and Oceania.
Almost half, or 49 percent, of the respondents were in their 20's while 18 percent were in their 30's. Teenagers comprised 17 percent while 8 percent were in their 40s and 6 percent in their 50's.
The respondents were also asked to pick hallyu stars they dream to be their travel buddies in Korea and nine of the top 10 picks were K-pop stars.
Boy band Super Junior came as top choice by 13 percent of the respondents. Big Bang came at second with 9 percent and JYJ at No. 3 with 7 percent.
TVXQ was at No. 4 with 5 percent and Girls Generation at No. 5 with 4 percent.
Completing the top 10 were Jang Geun Suk at No. 6 followed by Kim Hyun Joong, SHINee, Hyun Bin and 2PM. Hyun Bin, who starred in “My Name is Kim Sam Soon” and “Secret Garden,” is the only actor that landed in the top 10.
By language spoken by the respondents, English speakers chose Super Junior while the Japanese respondents picked Bae Yong Joon, who has a massive following in Japan.
Original article: http://www.mb.com.ph/articles/322895/kpop-overtakes-dramas-main-purveyor-korean-wave