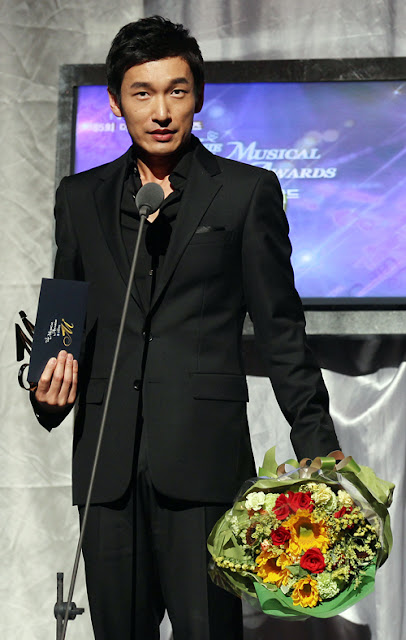 Jo, an actor who has starred in films and musicals, won for his role in “Jekyll & Hyde” while Cha bagged the award for her role in the musical “Sopyonje.”
For the second straight year, Xiah Junsu, member of boy band JYJ, won the popularity award. Junsu starred in the musical “Tears in Heaven,” which was nominated in 12 categories including best original musical.  His  “Tears in Heaven” co-star, Yoon Gong Joo, won the female popularity award.
Junsu, however, was unable to attend the awards ceremony because JYJ members were in Japan yesterday for their charity concert.
In his taped acceptance speech shown during the ceremony, Junsu said if he didn’t win the award, the video would not have been shown. Junsu, of course, was referring to the ban imposed by Korean TV stations on JYJ because of JYJ’s legal dispute with SM Entertainment.
“Thank you all so much for letting this video be aired,” according to a translation by fan forum OneTVXQ.com.
“Firstly, this popularity award that I got last year and this year. More than anything, because this is an award that’s given to me by the general public, it’s even more special to me, that’s why I’m feel thankful over and over again. In future, in order to become a more charming musical actor, to be loved by everyone, and to improve my acting, please continue to show me love and concern,” Junsu said.
The best supporting actor award went to Im Gihong of “Toxic Hero” while Jeong Young Ju of “Billy Elliot” won as best support actress.
The five teens who played Billy in “Billy Elliot” won the rookie award, namely Ji-Myung Lee, Jin-ho Jung, Sunu Lim, Se-Yong Kim and Joon-hyung Park. Lee Jah-ram won the rookie actress award.
The best original musical award went to “Sopyonje” while “Billy Elliot” won the best foreign musical. “Aida” was adjudged as best revival.
Original article source: http://www.mb.com.ph/articles/321786/jo-seung-woo-junsu-win-5th-annual-musical-awards