Fresh off the MuchMusic Awards, which she opened and closed in Canada last Sunday, Lady Gaga kicked off the MTV Video Music Aid Japan benefit show as part of a two-hour event that was expressly devised to benefit the Japanese Red Cross. The event was broadcast live from Makuhari Messe and aired to more than 30 million households on MTV Japan, MTV Korea, MTV SEA and MTV China. 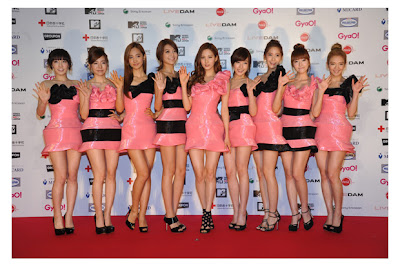 As expected, Gaga was typically Gaga in her performance. She opened with her current anthem, ‘The Edge of Glory,’ where she was seen trapped inside a giant spiderweb. First, she took refuge in the egg before getting tangled in a spiderweb. Thankfully, she managed to free herself from the web — her artistic expression representing the ability to wrestle yourself out of the chains of adversity — which many Japanese people have faced since the March 11 earthquake.
Once she was no longer contained by the web, LG was able to perform on a custom spider-shaped piano, inspired by Maman, a sculpture located in Tokyo’s Roppongi Hills. (What, is Gaga the new Peter Parker, only in female form?)
Then, she launched into a performance of ‘Born This Way.’ She started out with two long blue-green ponytails and a black, dominatrix-y dress. By the time her dancers joined her on stage, she had ditched her wig to reveal two knots on either side of her head in a style reminiscent of Gwen Stefani. She cavorted in a black bra and panties, which she tends to do. Gaga is as comfortable in her skivvies as a Victoria’s Secret model, and even when she is performing for a charitable cause, she is still completely and totally Gaga.
Don’t fret if you missed Gaga’s performance, though. Other global MTV channels will air a special, one-hour version of MTV Video Music Aid Japan on July 29, as special installment of MTV’s weekly global live music series, MTV World Stage. (Popcrush.com)
Source:  http://popcrush.com/lady-gaga-mtv-video-music-aid-japan/